Tiangong 1 Falls, will Australia see it?

UPDATE to the UPDATE: Tiangong 1 now predicted to re-enter today, April 2, between 8:46 am and 1:06 pm AEST, median 10:56 AEST, almost certainly not going to be visible from Australia. Probably Pacific Micronesia to tip of South America. 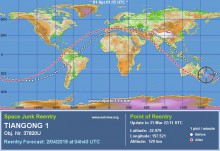 The Chinese Space Station Tiangong 1 is falling to Earth. The latest, predictions suggest that it will re-enter somewhere around April 1 (UT, Australia is 10 hours ahead of UT (east coast), 9.5 hours ahead (central) and 8 hours ahead (west coast)). Dr. Marco Langenbrook predicts that it will come down between 1.9 April +- 17h and 1.7 April +- 15 h with the latter more likely. This article explains why it is so hard to predict.

Where is still hard to say, part of the track goes over Southern Australia, and it is possible Southern Victoria and Tasmania could see the re-entry if it occurs in the early hours of April 1. Heavens above has a live feed of Tiangong 1's track. if you want to keep up with its possible visibility from your site.

Comments:
I have no idea what 1.9April even means. Perhaps it would be less confusing to use a conventional DTG.

the 0.9 is 0.9 0f a UT day (starting from midnight on the UT day. This is fairly common amongst comet obsevers. The latest predictions are for around UT 2 (crossing over the tip of south America) with a small possibility of around 04:00 UT April 2 (Crossing AUtralia).

Thanks. right now it seems to be hanging in there.

The Chinese government say it is down in the Pacific, but I wonder why the live trackers still have it at 146km altitude as of 0150UTC?
But with 8 eighths overcast here, we were never going to observe it anyway.

The "live" trackers aren't, they are just showing predicted positions (which get updated as new information becomes available). They will keep on showing tracks until the official confirmation (which we now have) trickles through (heavens above is still showing a live track).