The Full Moon is Saturday, March 31, this is a Blue Moon, the second for the year.  Venus is low in the twilight. Jupiter is now rising in the late evening skies but is still best in the morning. The waning Moon visits Jupiter on April the 3rd. Mars, bright Jupiter and Saturn form a line together with the bright stars Antares and Spica in the morning skies. Mars is closest to Saturn and the globular cluster M22 on the 2nd. 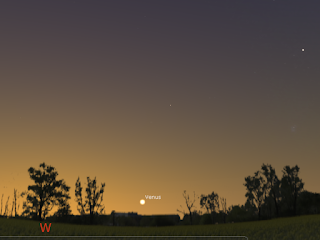 Evening twilight sky on Saturday March 31 looking west as seen from Adelaide at 19:37 ACDST (30 minutes after sunset). Venus is just above the horizon in the twilight.

Venus is rising higher in the twilight. While is is now much easier to see, you will still need a flat unobscured horizon to see it at its best. Venus is now visible to the unaided eye from 15 minutes after sunset and easy to see 30 minutes after sunset. Evening sky on Tuesday April 3 looking east  as seen from Adelaide at 23:00 ACST Jupiter is  above the horizon close to the waning Moon.

The inset is a simulated telescopic view of Jupiter and its moons at this time on the 4th, with Io and its shadow transiting the Face of Jupiter. 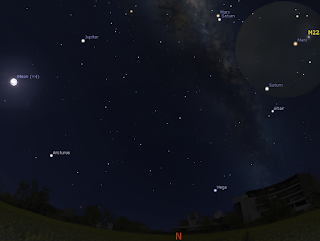 Morning sky on Monday April 2 looking north as seen from Adelaide at 5:03 ACST (90 minutes before sunrise). Mars is at its closest to Saturn and the bright globular cluster M22. The inset shows the telescopic view of Mars, Saturn and M22 in wide-field objectives.

Jupiter  is rising well before midnight, but it is still best to view in the morning sky, where it is high above the northern horizon. There are some good Jovian Moon events this week. Jupiter is visited by the waning Moon on April the 3rd

Mars is in Sagittarius the archer. Mars is moving towards Saturn at the beginning of the week.   Mars and Saturn (and the globular cluster M22) start the week within binocular range of each other. By the 2nd Mars is closest to both Saturn and M22. Mars and M22 are close enough (0.21 degrees) that they will fit into medium field telescope eyepieces fields of view. Mars and Saturn are a finger-width apart, so you will need a wide-field eyepiece for these two to fit. Scanning with binoculars around Mars and Saturn will be very rewarding now the Moon is out of the way.