The First Quarter Moon is Tuesday, December 26. The Earth is at Solstice on the 22nd, at this time the day is longest. 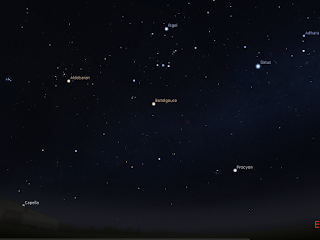 Evening sky on Saturday December 23 looking east as seen from Adelaide at 22:15 ACDST (90 minutes after sunset). The summer constellations of Taurus, Orion, Canis Major, Puppis and Carina are above the horizon. The beautiful clusters of the Pleiades and the Southern Pleiades (Theta Carina) are visible as well.(click to embiggen).

Mercury and Saturn are lost in the twilight. 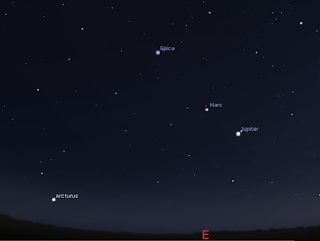 Morning sky on Friday December 22 looking east as seen from Adelaide at 4:51 ACDST (60 minutes before sunrise). Jupiter is prominent and can be seen close to the alpha2 Librae, forming a line with Mars.

Jupiter climbs higher in the morning sky and is now quite prominent. It is moving towards the bright double star alpha2 Librae (Zubenelgenubi). By the 22nd the stellar pair and Jupiter will be at their closest, less than a finger-width apart (technically 41 minutes of arc apart), and will fit within the field of view of a telescope eyepiece.

Mars is now well visible in the morning sky, and is moving away from the bright star Spica towards Jupiter. The pair will be under a hand-span apart by the end of the week.At this time Spica, Mars, alpha2 Librae (Zubenelgenubi) and Jupiter form a line in the morning sky. 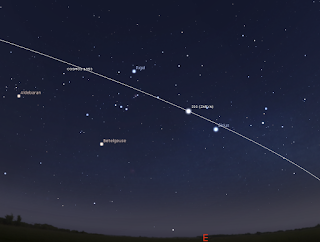 Evening sky on Thursday December 21 looking east as seen from Adelaide at 21:15 ACDST . The International Space Station passes through Orion and close to Sirius.

This week  there are a series of bright evening passes of the International Space Station. Some are low to the horizon others pass close to bright stars. When and what you will see is VERY location dependent, so you need to use either Heavens Above or CalSky to get site specific predictions for your location. If you are up early Christmas Morning there is a close pass to Sirius as well. For more charts and details see my Christmas ISS pass page.