The Perigee Moon ("Super Moon") of Tuesday January 2, What Can You See? 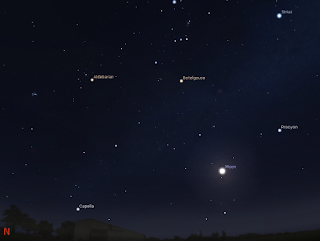 The  Full Moon of Tuesday, 2 January is a perigee Moon when the Full Moon is closest to the Earth. This is hot on the heels of the Monday, December 4 perigee Moon.

However, this will be a good opportunity to image the full moon through telescopes or binoculars. During the night the full Moon will recede from Earth, and images taken at hourly intervals (and at the same scale) should show the Moon shrinking. If you then image the Moon at the same scale on the night of the apogee Full Moon of 27 July, the difference in size will be obvious.

Full details and links to hints on imaging the perigee Moon are at the 4 December Perigee Moon page.