The Sky This Week - Thursday September 29 to Thursday October 6

The New Moon is Saturday October 1. Venus climbs higher in the evening sky. The thin crescent Moon is close to Venus on the 3rd and 4th of October.  Mars and Saturn are visible in the early  evening and form a long triangle with the red star Antares. The crescent Moon is close to Saturn on the 6th. Mars is in the "lid" of the Teapot of Sagittarius. There is a bright binocular nova in the constellation of Lupus.

The New Moon is Saturday October 1. The Moon is at  apogee, when it is furthest from the Earth on the 4th. Daylight Savings time Starts Sunday October 2. 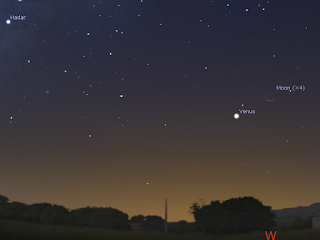 Evening sky on Tuesday October 4 looking west an 40 minutes after sunset. Venus and alpha Librae  are close together, with the thin crescent Moon above them.  Similar views will be seen throughout Australia at the equivalent local time. (click to embiggen).

Venus continues to rise into darker skies this week. Venus is high in the dusk sky and can be seen easily. From somewhat before half an hour to a bit after an hour and a half after sunset, Venus is easily seen, staying visible after twilight is over low above the horizon in truly dark skies.

At the start of  the week Venus is alone in the twilight skies.  As the week goes by Venus climbs higher into the evening sky towards the head of the Scorpion coming close to the brightest star in the constellation of Libra. On the 3rd on 4th the Thin crescent Moon is close to Venus. On the 6th Venus is closest to Alpha Librae. 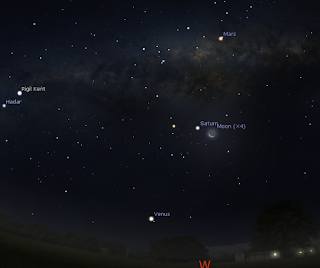 Evening sky on Thursday October 6 looking west as seen from Adelaide at 21:00 ACDST. Venus, Mars, Saturn, Antares and the Moon form a stunning trail in the sky. The inset shows the approximate binocular view of Mars and the Lagoon Nebula.  Similar views will be seen elsewhere in Australia at the equivalent local time. (click to embiggen).

Mars is in the western evening skies in the "teapot" of Sagittarius.

It starts the week within a binocular field of within binocular range of two glorious nebula, the Lagoon Nebula and the Triffid Nebula. As the week draws on it moves away from them towards the bright star that forms the"lid" of the "teapot" Kaus Autralis, and the bright globular cluster M22. By the end of the week Mars and M22 are in the same binocular field. Detailed printable charts are available here.

With the Moon out of the way watching Mars progress through the star fields of Sagittarius will be delightful, even by the end of the week the crescent Moon will not disturb the view.

Saturn was at opposition on the 3rd of June. However, Saturn's change in size and brightness is nowhere near as spectacular as Mars's, and Saturn will be a reasonable telescopic object for many weeks. Saturn is readily visible next to Antares in Scorpius. Saturn is still high enough for good telescopic observation in the early evening, setting abut midnight daylight saving time. In even small telescopes its distinctive rings are obvious. 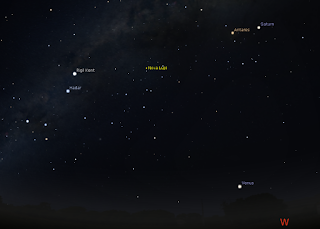 Location of Nova Lupi. The image shows the South-Western horizon as seen from Adelaide an hour and a half after sunset. Similar views will be seen elsewhere in Australia at equivalent times. Click to embiggen

A bright probable nova has been reported not far from epsilon Lupi. The nova has rapidly brightened and is now almost unaided eye magnitude and readily visible in binoculars. It is not clear if it will brighten further and become visible to the unaided eye. Detailed observing charts are here.

Mercury is low in the morning twilight but never rises far above the horizon.