The Full Moon is Saturday September 17. There is a penumbral eclipse of the Moon in the early morning of the 17th. Venus comes close to the bright star Spica in the twilight. Jupiter is lost to view. Mars and Saturn are visible all evening long and form a triangle with the red star Antares. There are a series of bright International Space Station passes near the bright planets. The Moon is close to the red star Aldebaran in the morning sky on the 22nd.

The Full Moon is Saturday September 17. There is a penumbral eclipse of the Moon in the early morning of the 17th. The Moon is at Perigee (when it sis closest to the Earth) on the 19th). 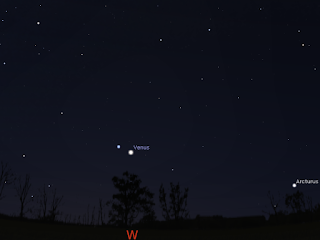 Evening sky on Sunday September 18 looking west an hour after sunset. Venus and Spica are close the horizon.  Similar views will be seen throughout Australia at the equivalent local time. (click to embiggen).

At the start of  the week Venus is just below to the bright star Spica, the brightest star in the constellation of Virgo.  Venus comes closer and is closest to Spica on the evenings of the 18th and 19th. 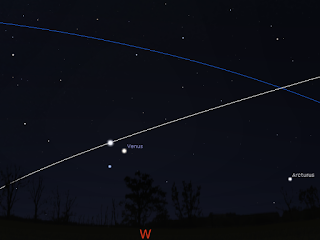 The ISS passes near Venus with Spica nearby as seen from Brisbane on the evening of  Wednesday 21 September at 18:41 AEST. Simulated in Stellarium (the ISS will actually be a bright dot), click to embiggen.

From the 16th to the 21st there is a series of bright passes of the International space Station to the bright planets, with some notable ISS-Venus passes, details are here. 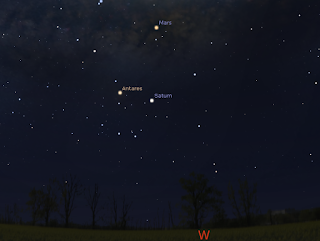 Evening sky on Saturday September 17 looking west as seen from Adelaide at 22:00 ACST. Mars, Saturn, Antares form a triangle. Similar views will be seen elsewhere in Australia at the equivalent local time. (click to embiggen).

Mars moves further down the body of the Scorpion this week, moving away from Saturn and the red star Antares. The triangle they form continues to lengthen.

Morning sky on Saturday September 17 looking west as seen from Adelaide at 04:00 ACST. Similar views will be seen elsewhere in Australia at the equivalent local time. (click to embiggen). Note the subtle darkening of the Moon.

On the morning of 17 September there is a penumbral eclipse of the Moon, where the Moon glides through the outer segment of the shadow cast by Earth. There will be a faint, but visible, darkening of the Moons northern regions.

Unfortunately, this all occurs in the early morning, so you will need to get up in the early hours to see it. However, to eclipse aficionados the subtle darkening of the Moons bright light to a pearly glow is quiet beautiful.

All of Australia will see this penumbral eclipse from start to maximum. However, in the eastern states the Moon sets before the eclipse finishes. More importantly, in the eastern states astronomical twilight begins around maximum, so the faint penumbral shadow will be washed out by the twilight glow about an hour before the Moon sets. Central states have around half an hour more time before the eclipse will be washed out.

For the Central states the eclipse begins at 2:23 am ACST, astronomical twilight 4:48 am (approx), maximum eclipse is at 4:24 am , the eclipse ends at 6:23 am around Moonset.