After a beautifully clear day it looked like cloud would ruin the close approach of Mars and M19. I got Don the 8"Newtonian out and assembled it anyway and cooled it down while organising tea.

After dinner I set up the camera on the scope, ran some test shots on the Moon, then a couple of test shots on Saturn (next time I check the focus properly) then finally went for Mars and M19.

I had to juggle the alignment to get both Mars and M19 in the picture (as you can see) and because I didn't get the camera-eyepeice alignment exactly right there is some weird brightness variations across the field of view, but otherwise it worked ot pretty well. Remember this is a simple point and shoot camera basically just stuck up to the lens of the telescope (with an adaptor to be sure, but nothing particularly fancy).

While taking images I alos checked out the view in binoculars, in 10x50 binoculars, with a waxing Moon in the sky M19 was clearly visible near Mars. 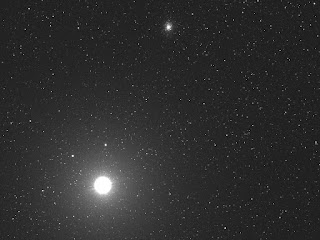 M19 and Mars taken with iTelescope T12. M19 is at the top. Mars (near the bottom) is grossly over exposed in this 10 second exposure. Click to embiggen