The Last Quarter Moon is Thursday August 25. Venus rises higher in the early evening sky while Jupiter and Mercury lowers towards it. Mercury and Jupiter are close on the 18th-21st. Mars and Saturn are visible all evening long. Mars is directly between the red star Antares and Saturn on the 24th.

The Last Quarter Moon is Thursday August 25. The Moon is at Perigee, when it is closest tothe earth, on the 22nd. 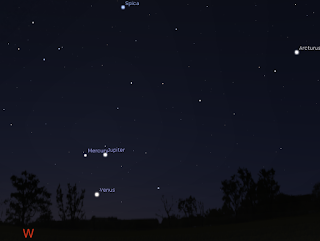 Evening sky on Saturday August 20 looking west at 60 minutes after sunset. Jupiter forms a triangle with Venus and Mercury.  Similar views will be seen throughout Australia at the equivalent local time. (click to embiggen).

Jupiter is in the western evening sky as the sun sets, and is  too close to the horizon for decent telescopic observation. Jupiter's Moons will be an still be excellent sight in binoculars for a short while before t sets.

Venus continues to rise above the twilight glow this week. Venus and fleet Mercury are now sufficiently high in the dusk sky to be seen easily. From a little after half an hour to an hour after sunset, Venus, and Jupiter (with Mercury nearby) make a nice line-up in the dusk sky which if continued on meets up with Mars, Anatres and Saturn.

This week Mercury begins to return to the horizon. From the 18th to the 21st Mercury is closest to Jupiter.

Jupiter, Mercury and Venus form a triangle in the dusk, with Jupiter coming closer and closer to Venus during the week, ahead of the spectacular finale on the 28th. 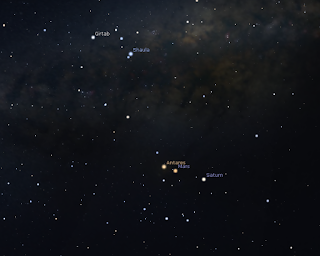 Evening sky on Wednesday August 24 looking west as seen from Adelaide at 22:00 ACST. Mars, Saturn and Antares form a  straight line. Similar views will be seen elsewhere in Australia at the equivalent local time. (click to embiggen).

Mars is high in the evening skies in the body of the Scorpion.

Mars moves further down the body of the Scorpion this week. Mars forms a line with the star Dschubba in the head of the Scorpion and Antares.  Mars draws away from Dschubba heading towards Antares and Saturn during the week. Mars forms a  (shrinking) triangle with Saturn and the red star Antares. By the 24th, at the end of the week, Mars is directly between Antares and Saturn.

Mars was at opposition on May 22,  and is still visibly dimming, but is still a modest telescope object. It is visible all evening long. In even small telescopes Mars will be a visible disk, and you may even be able to  see its markings.