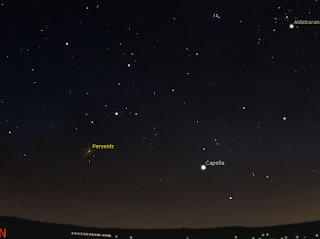 If you are clouded out, or south of Brisbane, or just don't want to get up at 4:00 am, you can try watching the following web cams in the northern hemisphere to catch the Perseids:

And just a reminder, my viewing hints and charts for Australia are here
http://astroblogger.blogspot.com.au/2016/08/australian-perseid-meteor-shower.html

Comments:
Hi, I came across your blog when looking for info on last nights celestial triangle near the moon. It is very striking. I saw the 3 planets forming a triangle on Thur 11th Aug 2016, from Sydney, above left to moon, between 8pm - 11pm. I looked online, and it appears they are Mars, Saturn and the red star Antares. Mars was very clear, glowing orange located closest to the moon. I took photo's and also captured a strange white glob round shape near the moon, but not sure what that is. I also have captured over 3 months a red and purple gas like orb moving around the moon, and wonder if this has an actual name? It is always has a purple centre surrounded with red. Do you know what this anomaly could be, or where I could search? Mary