The Last Quarter Moon is Tuesday June 28. Jupiter is visible most of the evening. Mars and Saturn are visible all night long. Saturn is close to the red star Antares and forms a triangle with Mars. Mercury and Venus are lost in the twilight. Comet C/2013 X1 PanSTARRS is visible in binoculars in the evening sky. 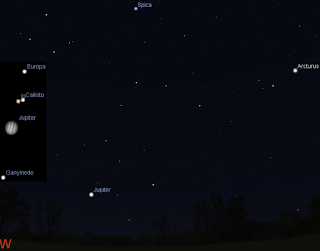 Evening sky on Saturday June 25 looking west as seen from Adelaide at 22:00 ACST. The inset is the telescopic view of Jupiter at this time. Similar views will be seen elsewhere in Australia at the equivalent local time. (click to embiggen).

Jupiter is in the north-western evening sky as the sun sets, and is  good for telescopic observation from around 18:00 on until around 10:00 pm when it will be a little too close to the horizon. Jupiter's Moons will be an excellent sight all evening, on the 27th Io crosses Jupiter's face, and on the 28th Ganymede is occulted by Jupiter. 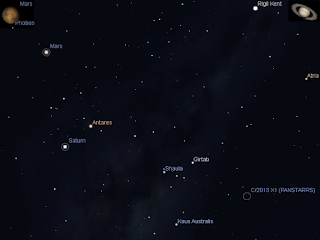 Evening sky on Saturday June 25 looking east as seen from Adelaide at 22:00 ACST. Mars, Saturn and Antares form a triangle. Comet C/2013 X1 is now visible in the evening, close to the tail of the Scorpion. The inset shows telescopic views of Mars and Saturn. Similar views will be seen elsewhere in Australia at the equivalent local time. (click to embiggen).

Mars is also within half  finger-width from the magnitude 8.4 globular cluster NGC 5897. This is visible in binoculars only under dark sky conditions, but both Mars and the cluster will fit within a telescope eye-piece view and should be interesting together.

Comet C/2013 X1 (PANSTARRS) rises  around 5:00 pm local time, and is clear the of  horizon murk from around 10 pm.  It is currently around magnitude 6.2. From around the 23rd the Moon will no longer interfere with viewing it in the evening. The comet will be close to the tail of the Scorpion for much of this week.