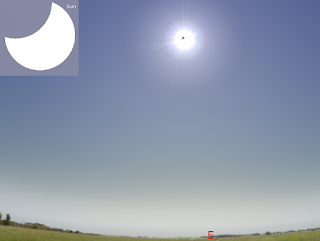 The partial eclipse of the Sun as seen from Darwin near maximum eclipse, 10:17 am AEST. Simulated in Celestia. (click to embiggen)

The March edition of Southern Skywatch is  up.

This month is quite busy. A partial solar eclipse, a penumbral eclipse of the Moon, the opposition of Jupiter and  still more nice planetary action.

Jupiter and Mars are now in the evening sky, and Saturn joins them mid month. At the begining of the month in the early morning  Mercury, Venus, Saturn, Mars and Jupiter form a line in the morning sky and the crescent Moon joins them. Mercury leaves the line-up early in the month.

Jupiter is at opposition, when it is biggest and brightest as seen from Earth, and has some nice jovian moon action.

Mars comes very close to the star Graffias and has close encounters with the waning Moon.

Venus is prominent in the morning twilight and is close to the crescent Moon on the 7th.

Mercury , the crescent Moon and Venus from a triangle on the 8th.