The First Quarter Moon is Sunday January 17. Jupiter is visible in the late evening sky. Jupiter, Mars, Venus and Saturn form a long line in the morning sky. Venus and Saturn  form a triangle with the red star Aldebaran.

The First Quarter Moon is Sunday January 17. The Moon is at perigee, when it is closest to the Earth, on the 15th. 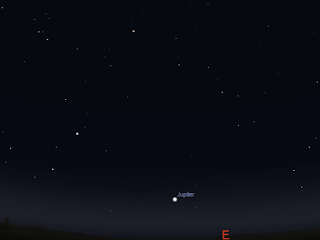 Evening sky on Saturday January 16 looking east as seen from Adelaide at 23:55 ACDST. Jupiter is just above the horizon shortly before midnight. Similar views will be seen elsewhere in Australia at the equivalent local time. (click to embiggen).

Jupiter enters the evening sky just before midnight daylight saving time, it is low on the horizon for most of the week. 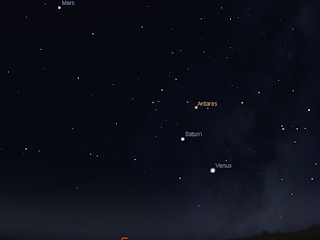 Early morning sky on Sunday January 17 looking east as seen from Adelaide at 5:00 ACDST showing Mars, Venus and Saturn with the red star Antares close by.  Similar views will be seen elsewhere in Australia at the equivalent local time. (click to embiggen).

Venus, Saturn and the red star Antares form a triangle low in the early twilight. During the week Venus moves away Saturn from Saturn making the triangle broader. There are lots of interesting things in the sky to view with a telescope. If you don't have a telescope, now is a good time to visit one of your local astronomical societies open nights or the local planetariums.