The Full Moon is Thursday November 26. Saturn is lost in the twilight. Jupiter, Venus and Mars form a line in the morning sky. A series of bright International Space Station passes brighten up the evening.

The Full Moon is Thursday November 26. The Moon is at Perigee, closest to the Earth, on the 24th. 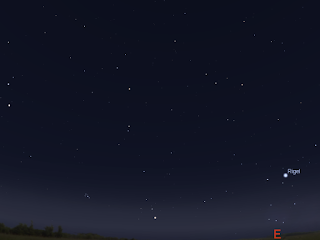 Evening sky on Saturday November 21 looking east as seen from Adelaide at 21:00 ACST.  The beautiful cluster the Pleiades, the Hyades and Orion . Similar views will be seen elsewhere in Australia at the equivalent local time. (click to embiggen). 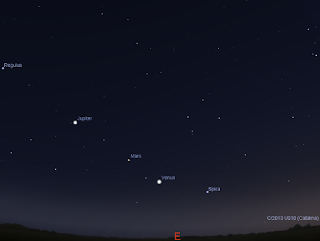 Early morning sky on Saturday November 21 looking east as seen from Adelaide at 5:00 ACDST showing Jupiter,  Mars, and Venus and comet C/2013 US10.  Similar views will be seen elsewhere in Australia at the equivalent local time. (click to embiggen).

Jupiter, Mars, Venus and the bright stars Regulus and Spica form a line in the sky this week. Comet C/2013 US10 joins the line-up later in the week, but is much fainter than anticipated and is probably a telescope only object low above the pre-dawn horizon. 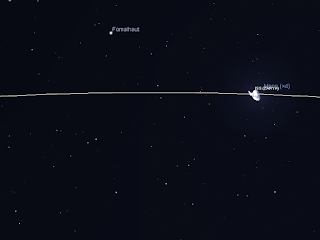 The ISS passes near/over the Moon, as seen from Brisbane on the evening of Saturday 21 November at 19:36 AEST. Simulated in Stellarium (the ISS will actually be a bright dot and the size of the Moon is exaggerated), click to embiggen.

There are a series of bright International Space Station passes in the early evening during the week. In some stes the Moon passes close to the Moon, and for Brisbane it may even pass over the Moon. More details and state specific instructions here.