The New Moon is Tuesday October 12. Saturn is near the head of the Scorpion. Comet C/2013 US10 may be visible in binoculars. The mornings of this week is full of interesting planetary action. On the 9th Venus is occulted by the Moon and on the 10th the crescent Moon, Mars and Jupiter form a triangle in the morning sky. After this Mars and Jupiter draw close.

The New Moon is Tuesday October 12.  The Moon is at apogee (when it is furthest from the Earth) n the 11th. 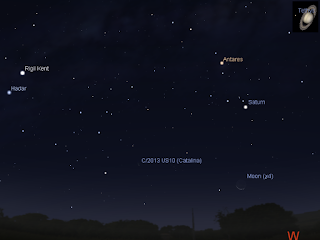 Evening sky on Thursday October 15 looking west as seen from Adelaide at 20:03 ACST.  Saturn is  easily visible  above the western horizon  near the head of the Scorpion . The thin crescent Moon is just above the horizon. Comet C/2013 US10 is visible in telescopes (and possibly binoculars). The inset shows the telescopic view of Saturn at this time. Similar views will be seen elsewhere in Australia at the equivalent local time. (click to embiggen).

Comet C/2013 US10 is nearly midway and down from the Pointers and the head of the Scorpion. It is heading towards the horizon, so the window for observation is quite short. It is brightening very slowly, and looks to be around a magnitude dimmer than predicted (hovering somewhere around magnitude 7). It should be reasonably easy to see in good binoculars. A black and white spotters map is here. 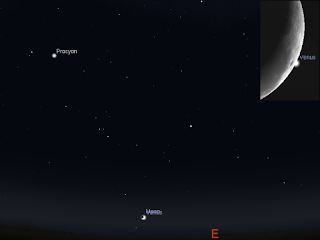 Early morning sky on Friday October 9 looking east as seen from Adelaide at 4:55 ACDST showing the crescent Moon and Venus, just as Venus is about to disappear behind the Moon.  The inset shows the telescopic view of Venus at this time. Similar views will be seen elsewhere in Australia, see the table here for timings from several representative cities. (click to embiggen).

On the 10th the thin crescent Moon forms a triangle with Mars and Jupiter. During the rest of the week Mars and Jupiter come closer together, a prelude to their closest approach on the 18th.

Venus climbs higher in the morning twilight and is now easy to see. It is a  distinct "half Moon" shape and impressive in a small telescope. Venus, Mars, Jupiter and the bright star Procyon form a line in the sky. Venus is also close to the bright star Regulus on the 9th.

On the 9th there is an  occultation of Venus with the eastern states having the best views, and WA missing out completely. The occultation starts with the "half Moon" Venus slipping behind the crescent Moon when the pair are low above the horizon. The occulation ends with Venus slipping out from behind the dark side of the Moon in the late twilight (central states) or just after sunrise (eastern states). This is also an excellent opportunity to see Venus in the daytime, using the Moon as your guide.

After the occultation. over the next couple of weeks there will be a morning planet dance, with Venus, Jupiter and Mars coming close together.

The Sky This Week - Thursday October 1 to Thursda...
Southern Skywatch October, 2015 edition is now out!
The Perigee Moon ("Super Moon") of Monday Septembe...
Call off the Apocalypse, the Lunar Tetrad was a Tr...
The Sky This Week - Thursday September 24 to Thurs...
The ISS Zooms Past Saturn (22 September 2015)
No, Neither an Asteroid nor a Comet will hit us in...
Some Bright International Space Station Passes and...
Saturn and the Moon (Saturday 19 September, 2015)
Again, The Crescent Moon, Mercury and Spica (16 Se...