The Sky This Week - Thursday October 29 to Thursday November 5

The Last Quarter Moon is Tuesday November 3. Saturn is near the head of the Scorpion and close to the star Graffias. In the morning the planet dance continues, Venus  moves away from Jupiter and is closest to Mars on the 3rd. The Moon joins the line-up from the 4th. Asteroid 2015 TB145 visible in telescopes on the 31st. 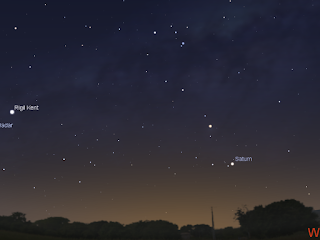 Evening sky on Sunday October 25 looking west as seen from Adelaide at 20:30 ACST.  Saturn is  easily visible  above the western horizon in the head of the Scorpion. Similar views will be seen elsewhere in Australia at the equivalent local time. (click to embiggen).

Saturn is easily visible from twilight in the head of the constellation of the Scorpion not far from the bright red star Antares. The sight of the distinctive back to front "question mark" constellation of the Scorpion above the horizon, with bright Saturn in its head, is very nice indeed. Saturn is close to the bright star Graffias (Beta1 Scorpius) at the start of the week. Over the next week it moves towards the double star nu Scorpii.

While Saturn is  readily visible from the end of twilight, there is only a narrow window for observation from around 8:30 until around 9:00 pm as it gets too close to the horizon. This is still a good time to scan Scorpius and Sagittarius with binoculars to reveal the clusters in and around the Scorpions tail, they will remain reasonably visible until around 11 pm, although the bright Moon will initially make seeing them difficult. 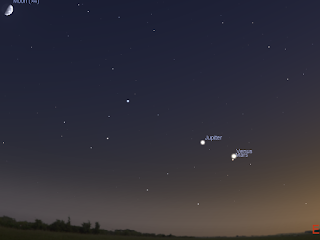 Early morning sky on Monday November 3 looking east as seen from Adelaide at 5:30 ACDST showing Venus, Jupiter and Mars. Venus and Mars are at their closest. The Last Quarter Moon joins the picture. Similar views will be seen elsewhere in Australia. (click to embiggen).

Venus, Mars, Jupiter and the bright stars Regulus and  Procyon form a line in the sky. Venus starts the week close to Jupiter. Over the week Venus draws away from Jupiter and approaches Mars. Mars and Venus will be closest on the 3rd of November. They will be less than a finger width apart, and will fit in a low power telescope eyepiece. However, the brightness of Venus will make photographing the pair together in a Telescope difficult. 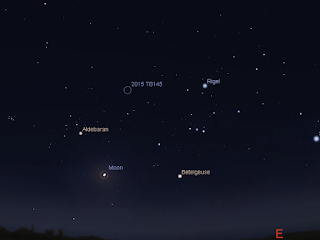 The so called "spooky" Near Earth Asteroid 2015 TB145 will come relatively close to Earth on all hallows eve, 31 October  at around 1.3 Earth-Moon distances, ie it is further away from us than the Moon, so there is no chance it will hit us. Unfortunately Australia does not see it at its brightest, but amateurs with a decent telescope will be able to see it on the morning of the 31st.