The Perigee Moon ("Super Moon") of Monday September 28, What Can You See?

The Full Moon of this Monday September 28 occurs at perigee.  The actual moment of Full Moon is  2:50 UT, which is 12:50 AEST (that is around midday when the Moon is below the horizon) and perigee is an hour before that.

Some folks have started to call perigeean Full Moons "Super Moons" for reasons that, to my mind, are not entirely justified.  This comic is relevant.

Still, we have the name, let's move on. What will you see, and what are the implications of this coming "Super Moon".

Without a telescope, and a near photographic memory, not much. This years perigee full Moon could appear up around 12% bigger and around 25% brighter in the sky than this years apogee Moon.

Technically the Moon is around 33 arc minutes wide (34') at Perigee and 30' at apogee. The limit of distances that someone with good vision can distinguish between is 1 minute of arc (about the width of a human hair). While a 4 minute of arc difference can theoretically be seen, you need good eyesight and a good memory to compare the Moon sizes after 7 months. 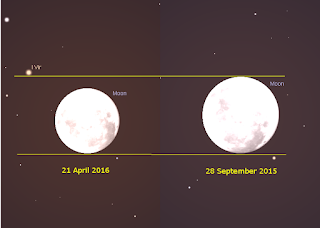 Comparison of the April 2, 2016 mini Moon and the September "Super" Moon simulated in Stellarium. With the unaided eye, the Moon only appears half a finger-width wide, so the difference is much harder to see.

In both cases the Moon is around half the width of your finger, and just 4' (that's minutes of arc, about 4 human hairs in width) different in size. This is around the limit of what humans can distinguish. If you have great eyesight and and a great memory you will be able to distinguish between the March and September full Moons.

As well, unless you have a REALLY good memory, you will be comparing it with the full Moon the month beforehand, when it was 33'45" in diameter, that is not much different at all.

However, it will be a good photo opportunity, if you have a decent zoom on your camera or access to a small telescope. If you have not already taken an image on March 5,  taking a photo of the Moon on September 28 and then again on  April 21 in 2016  you will see a decent difference (you need to use exactly the same zoom enlargement, see Inconstant Moon for instructions).

Here's my images from the January/August apogee and perigee Moons respectively.

The Moon will be bright and lovely, if lucky you may see a satellite pass or a meteor (sadly, there appear to be no International Space Station passes  at this time). Maybe you may see a Moon Bow. But nothing else will happen.

One of the reasons why I am annoyed with the term "super moon" is that it was coined by astrologer Richard Nolle. While I am all for getting people excited about going out an seeing the sky for whatever reason, Mr. Nolle promoted the idea that "super moons" are linked with earthquakes, the name "super moon" almost always pulls up this spurious idea.

They are not. And the "super moon of March 2011, which was much closer than this one, didn't result in any unforeseen earthquake activity.

The total Lunar Eclipse is also part of a tetrad (actually a triad) of Lunar eclipses some folks are worried will bring about "The End of Days". Which it won't, not least because the tetrad is actually a triad.