Call off the Apocalypse, the Lunar Tetrad was a Triad! 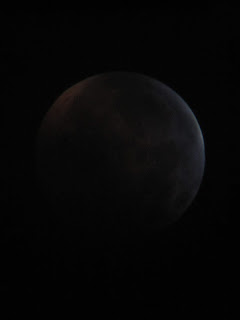 The April 2015 Lunar Eclipse was not a total eclipse, so the apocalypse is averted.

Seeing as we have survived the Asteroid Apocalypse, the Next Big Thing is the final in the Tertrad of Blood Moons, the Total Lunar Eclipse on 28 September.

I've already written why the whole "Tetrad of Lunar Eclipses" and the "end of Days" is nonsense. A tetrad occurs roughly every 10-20 years. The apocalypse failed to materialise after the last tetrads in 1985-1986 and in 2003-2004 and after the many, many more over the past centuries, so it is not going to happen now.

However, there is a far more important reason this coming tetrad will not herald the "End of Days".

It is not a tetrad

The April 2015 Lunar Eclipse, the third eclipse in the terad, was not a total eclipse, so the apocalypse is averted.  The original calculations for the length and depth of the April eclipse depended on an old model of depending on the shape model for the Earth's shadow and how the edge of the Earth's shadow is defined.

However, with newer models and calculations, the April eclipse turned out to be quite short.  And in reality, it was not quite total either.

You can see images here. My own not so flash images are here, but the bottom line is that the April 4 eclipse was not total. Only by a whisker but still not total.

So, no total eclipse, no tetrad, not "End of Days".

Now those of you who do get to see the eclipse (not Australia unfortunately) can view this lovely spectacle in peace.