The Last Quarter Moon is Friday August 7. Venus is brilliant low in the twilight evening sky with bright Jupiter nearby. This is the last week to see Venus before it disappears below the horizon. Comet C/2014 Q1 PanSTARRS is visible in telescopes. Mercury is very close to Jupiter on the 7th. Saturn is near the head of the Scorpion. Perseid meteor shower 13th-14th. 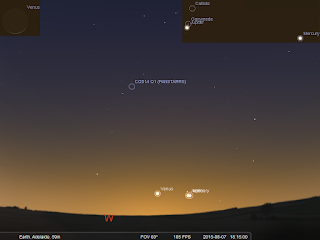 
Mercury climbs from the twilight into the evening sky, heading for Jupiter. The pair and Regulus will be less than a finger-width apart on the 7th. At this time Mercury and Jupiter fit into the low power field of a telescope. You will need a fairly level, unobstructed horizon to see them.

Mars  returns to the morning skies this week, but is deep in the twilight and requires binoculars to see.

Venus is becoming harder to see above the western horizon in the twilight as it rapidly falls towards the horizon. At civil  twilight, half an hour after sunset, it is around a hand-span above the horizon, and is lost in the twilight by the end of the week. Venus is a distinct thin crescent shape in  small telescopes and even strong binoculars. 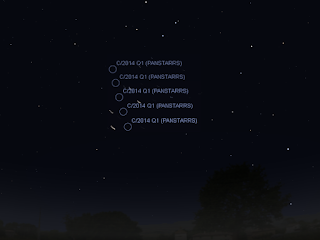 The evening sky at 7:00 pm ACST looking west as seen from Adelaide from 6 August to 13 August.  The circles show successive positions of Comet C/2014 Q1 PanSTARRS every two days. Similar views will be seen elsewhere in Australia at equivalent local times. (click on image to embiggen).

Comet C/2014 Q1 PanSTARRS is now visible in the evening when full dark has fallen.  If you try looking an hour and a half after sunset you will see it reasonably high above the horizon. It is only visible in a telescope now. It is now around magnitude 8 and  looks like a faint fuzzy ball of light in binoculars. it is now inside the constellation of Crater, the Cup (in the handle).

Jupiter  is also becoming harder to see in the early evening twilight sky to the right of  Venus in the north-western sky. It is also near the bright star Regulus in Leo. Jupiter and Venus  move further apart as the week goes on while Jupiter moves closer to Regulus, being closest on the 11th.

Mercury, Jupiter and Regulus will be less than a finger-width apart on the 7th. At this time Mercury and Jupiter fit into the low power field of a telescope.  You will need a fairly level, unobstructed horizon to see them.

Jupiter is no longer high enough for telescopic observation. Jupiter's Moons are still putting on a reasonable display in  binoculars before the world is lost in the twilight. 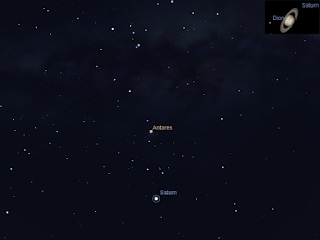 Evening sky on Saturday August 8 looking at the zenith while facing west as seen from Adelaide at 22:00 ACST.  Saturn is  easily visible high above the western horizon near the zenith near the head of the Scorpion. The inset shows the telescopic view of Saturn at this time. Similar views will be seen elsewhere in Australia at the equivalent local time. (click to embiggen). 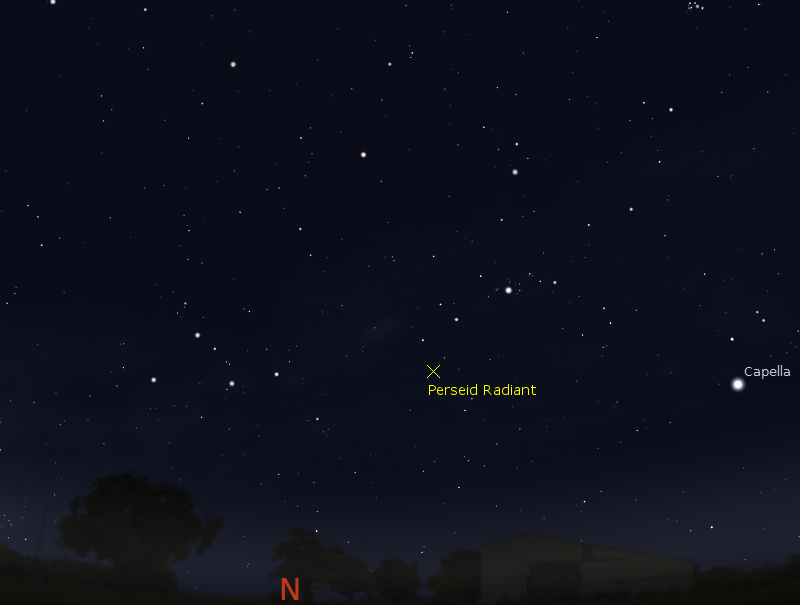 Basically, anywhere south of the latitude of Brisbane (27.3 degrees South) will see few, if any, meteors under ideal conditions. This year, despite having Moonless skies, with  the peak occurring during local daylight hours,  the chance of anywhere in Australia seeing decent Perseids is low.
Meteor rates for your location can be checked with the Meteor Flux Estimator