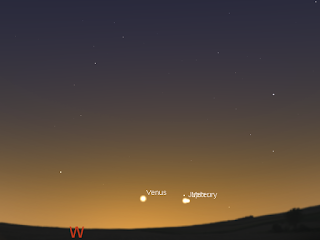 North-western evening sky at 6:15 pm as seen from Adelaide on August 7, Mercury and Jupiter are less than a half a finger-width apart.

This month starts with some excellent planetary action  with Jupiter meeting Mercury and Mercury the Moon.

Jupiter is in the early evening twilight sky in the first half of the month before it disappears into the twilight. It meets swift Mercury on the 7th.

Mars is visible low in the morning twilight.

Venus is readily visible in the evening twilight early in the early part of the month.  It is visible in even small telescope of good bioculars as a thing crescent. It is lost to sight around the 10th-13th as it comes close to the Su. It re-emerges in the morning sky in late August.

Saturn is in Libra. Saturn is close to the waxing Moon on the 22nd.

Mercury enters the evening sky it is close to Jupiter on the 7th, and the Moon on the 16th.