Tomorrow we Land on a Comet


Tomorrow (Wednesday) at 04:03:20 UT, if all has gone well, the Philae lander will separate from the Rosetta spacecraft and begin its descent to Comet 67P/Churyumov-Gerasimenko, by 16:02:20 UT Philae will have either landed on the comet, or crashed, or bounced off and gone spinning into space  (for Australians, that is 3 pm Wednesday and 3 am Thursday). Either way this represents a remarkable achievement.

Humans have done some extraordinary things in space, we have landed a laser wielding, atomic powered robot on Mars with a sky crane, parachuted a probe into the freezing methane clouds of Titan, sent a probe ballooning in the searing hell  that is Venus's atmosphere, but nothing compares to this.

Mars, Venus and Titan are all challenges on their own, but compared to comets they are staid. They orbit predictably, they rotate predictably, gravity is predictably down  and we had a reasonably good idea of what their surfaces are like (well Titan was a gamble, the probe could have landed in one of the methane seas).

But comets are a different kettle of fish, while their orbits are more or less predicable (given that outgassing can push them off course), they tumble rather than rotate and they vent gas and small particles that can .. inconvenience .. a spacecraft in a rather terminal way.

Comet 67P is even more of a nightmare, instead of a sort of battered potato shape most people expected, it is like a rubber duck from the dungeon dimensions. Flat plains are interspersed with boulder fields, craters and towering cliffs. The concepts of up and down on this weirdly spinning object are more like an Escher drawing than our traditional concept of a planet or asteroid.

While we have sent spacecraft scooting past comets before, even fired a copper slug into one, but we have never attempted to land on one. We have sort of landed on two asteroids. Itokawa, where the Hayabusa probe sort of bumped into it (and bounced off again with a precious dust sample)  rather than landed per se, and Eros, where the Shoemaker orbiter  wasn't actually designed to land but was rather crashed slowly on it. Itokawa is around 10 times smaller than 67P, and Eros 10 times larger, both giving entirely different challenges.


In contrast, Philae is designed to soft land and stay on the comet for months, taking measurements as the comet heats up. The descent will be slow, and it should touch down relatively softly, given the complicated calculations required to land the craft of the around 1 Km square patch of level surface Philae is aiming for, nestled in between  boulders and scarps (and a rather dramatic cliff). 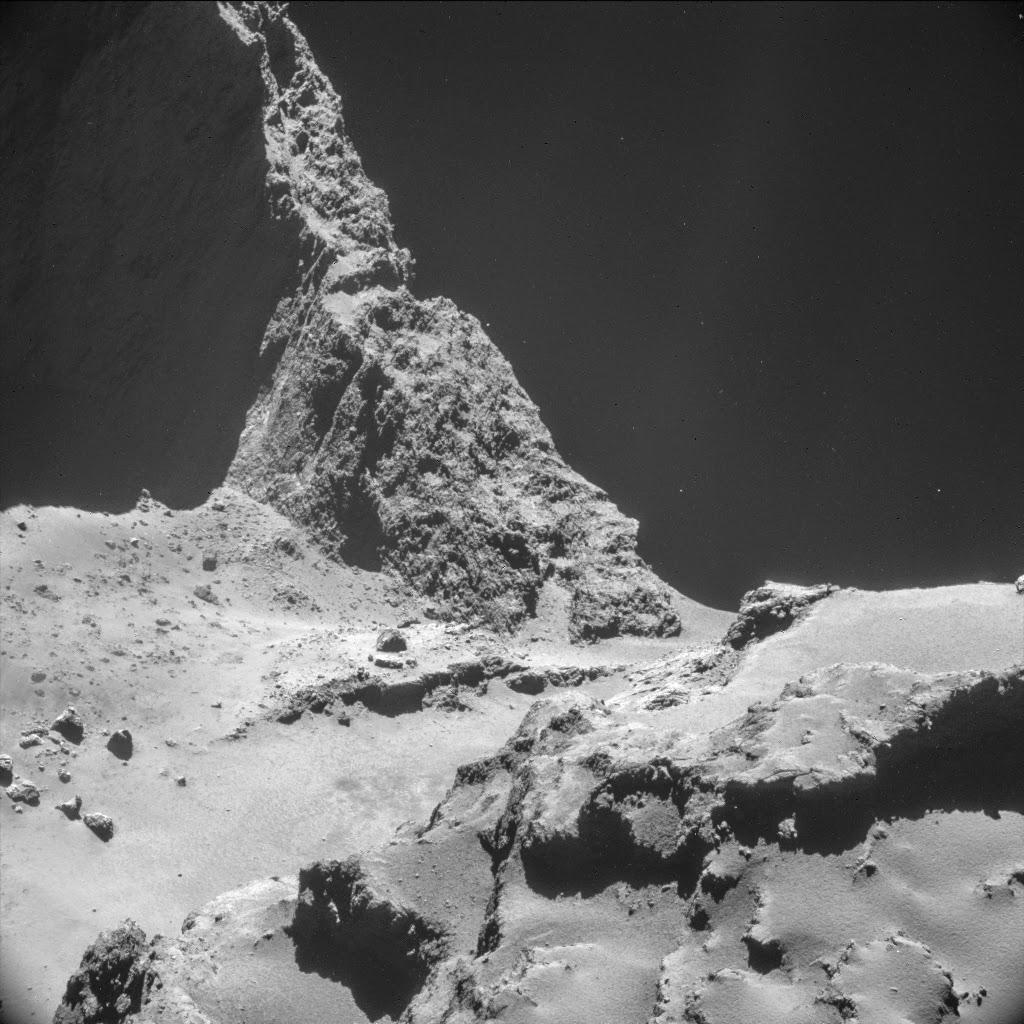 Unlike Itokawa and Eros, which had rather plain surfaces (even if scattered with alarming boulders), 67 P is a nightmare of chaos. Missing the landing site will be catastrophic.

If it succeeds in making it to the landing spot safely, Philae has a harpoon (a SPACE HARPOON!) to help anchor it to the surface as well as the equivalent of crampons on the lander feet.

The Agilkia site seems to be faily level, and covered with what looks like snow, but this is probably unconsolidated dust. What it is on top of nobody knows. While the comet has the overall density, and possibly the structural strength, of a snowbank, exactly how the material that makes up the comet, (rock, dust, ices, organic gunge) is organised is unclear.

Will there be a  layer of rock cemented with ice, a layer of mostly ice, a messy honeycomb of rock and ice fragments with lots of space between? Will the dust layer be too deep and fragile for Philae to hold on to? Will the lander plummet into the surface like a rock thrown at a snowbank?

These are all questions that will be answered on the day. So until then we have to take a deep breath and wait. You can make a model of Rosetta while you wait.

You can watch the comet landing livestream here http://new.livestream.com/ESA/cometlanding
It will remain live until 19:00 UT (6 am Australian time).

Comments:
Hey Ian,
I'm looking forward to this !
I'm guessing "bramatic" is not a cromulent new word but is actually dramatic ?

Yes, one of my famous typos, but given the amazing trampolining Philae, I think we need Bramatic as a word.