The ISS zooms past Saturn, Mars and Antares 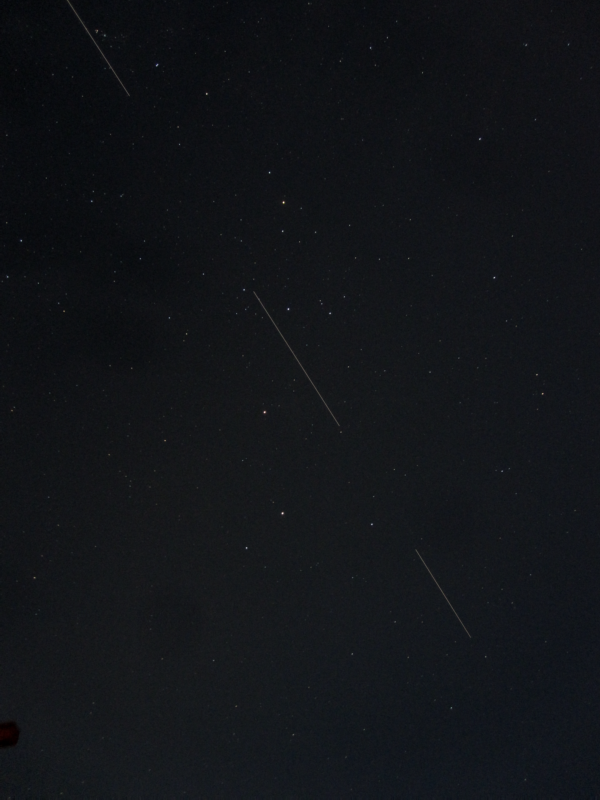 The ISS flies past (from bottom to top) Saturn, Mars and Antares on the evening of 6 September. Stack of 3x15 second images. Images taken at 400 ASA with my Canon IXUS, stacked in ImageJ (SUMMED). Click to embiggen for a better view of the planets and stars.

After a long spell of missing the International Space Station (no passes, cloud, driving kids about), tonight's bright pass did not disappoint.

A beautifly clear sky, slightly pale from moonlight. The ISS climed up past Acturus, brightening as it went, the quiclly falsed past Saturn, Mars, throgh the head of the Scorpion, past Antares then glided over the Southern sky.

Very nice indeed. I should have used a shorter exposure, as the ISS rapidly shot through the Scorpion, but here is a 3 frame animated GIF of the flyover.

There a few more nice bright passes this week, but none quite so beautiful as seen from Adelaide.

Comments:
Ian, Thanks as always for your work !
On Friday night , we were under heavy rain clouds so missed the ISS.
I dragged the boys off their games last night. We saw a N/S satellite (~-0.5) then a bright flare off another. That one didn't match an Iridium and I haven't looked it up yet.
Then the ISS came shining through the clouds and skimming past the moon before disappearing into the clouds again. It's such a pretty sight!