The Sky This Week - Thursday July 31 to Thursday August 7

The First Quarter Moon is Monday August 4. Mars and Saturn are prominent in the evening sky. The Moon is close to Mars on August 3. Saturn is occulted by the Moon August 4 in the third of a series of rare occulations. Venus is prominent in the twilight.

The First Quarter Moon is Monday August 4. Saturn is occulted by the Moon August 4.  (scroll down for times) 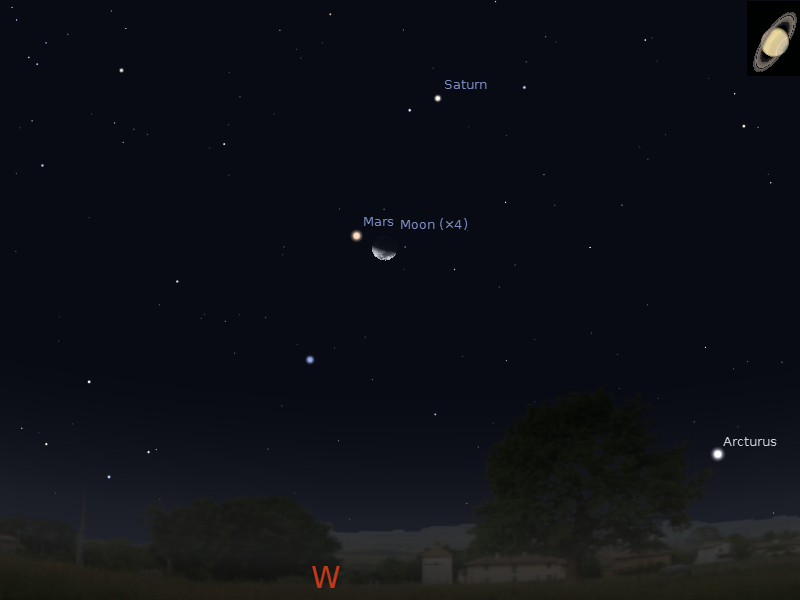 Evening sky on Sunday August 3 looking north-west as seen from Adelaide at 22:00 (10:00 pm) ACST in South Australia. Mars and the Moon are close together (the Moon will be close to Saturn the following night, see below). Similar views will be seen elsewhere at the equivalent local time (click to embiggen). The insets show telescopic view of Saturn at this time,

Mars  is easily seen in the north-western evening sky. It is highest in the sky around 17:30, setting after midnight. Mars was at opposition, when it is biggest and brightest, on the 9th of April, and is still  readily distinguishable as the bright red/orange object above the north-western horizon in the early evening. Mars is in the constellation of Virgo not far from the bright star Spica. Over the week it draws away from Spica heading towards Saturn.  The Moon is close to Mars on August 3.

Saturn is high in the evening sky, and was at opposition on June 11th. Saturn is visible most of the night. Saturn is high enough from around 8 pm for decent telescopic observation and sets around 1:30 am.  Saturn is in Libra near the head of the constellation of the Scorpion and forms a line with the two brightest stars of Libra. Saturn is occulted by the Moon August 4. (see below) 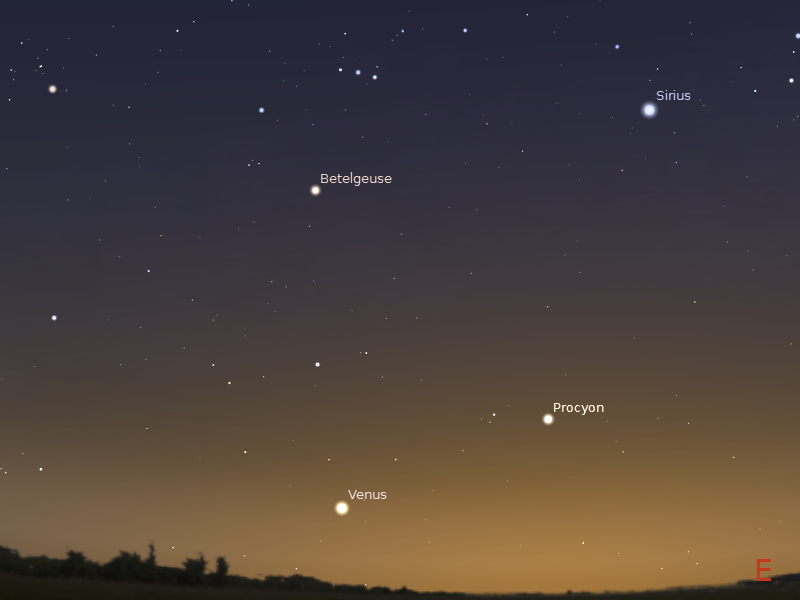 Morning sky on Sunday August 3 looking north-east as seen from Adelaide at 6:30 am ACST.  Venus forms a triangle with the bright red star Betelgeuse and the bright star Procyon. Similar views will be seen throughout Australia at equivalent local times. (click to embiggen).

Venus was at its furthest distance from the Sun on the 23rd of March, and is slowly sinking towards the horizon. Venus is a clear gibbous Moon shape in a telescope. Venus forms a triangle bright red star Betelgeuse and the bright star Procyon. During the week Venus comes closer to the horizon, although still readily visible in the twilight. 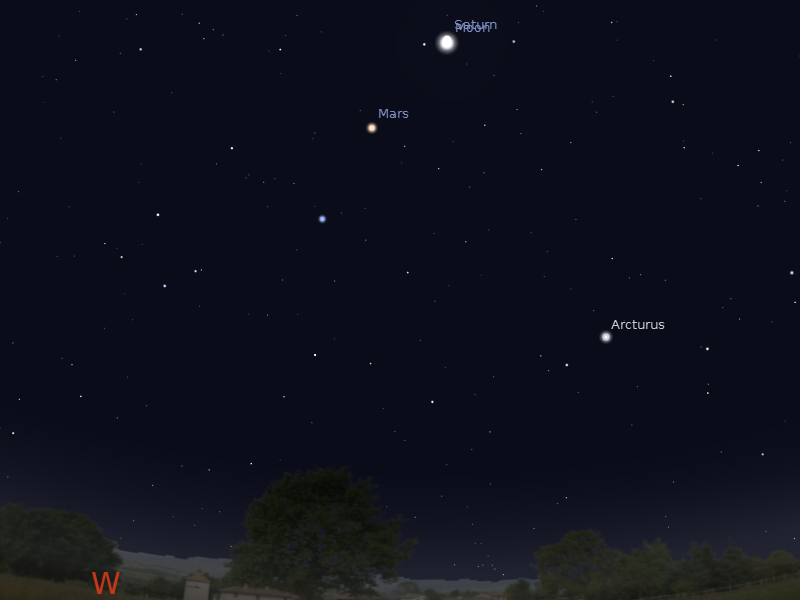 The Moon looking north-west at 8:15 pm ACST in Adelaide on 4 August just before the Moon covers Saturn. Similar views will be seen elsewhere at the equivalent local time.

On the evening of Monday 4 August Saturn is occulted by the Moon as seen from the most of Australia (and all of New Zealand).

The Moon is a very obvious signpost where look and Saturn will be the brightest object near the Moon. Start watching about half an hour before hand to get set up and familiar with the sky. The occultation is early enough so that kids can get involved. Why not have a star party in your back yard?

The occultation starts around 21:20 eastern time, 20:30 central time  and 18:15 Western time. For exact times from many cities and observing hints, see my Saturn Occultation site.


There are lots of interesting things in the sky to view with a telescope. Especially with Mars and Venus and Saturn so prominent in the sky.  If you don't have a telescope, now is a good time to visit one of your local astronomical societies open nights or the local planetariums.