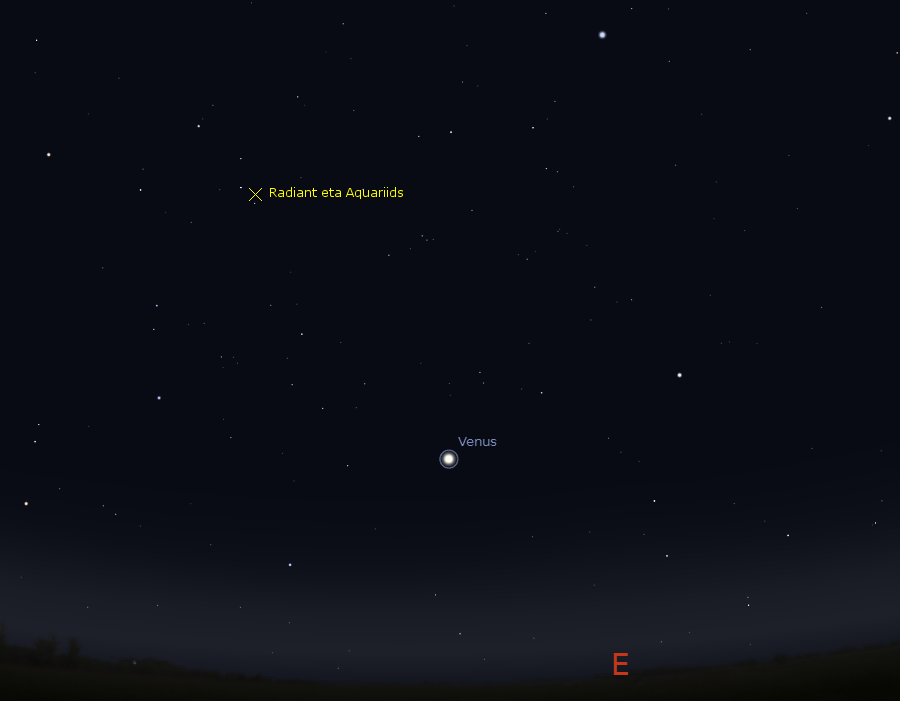 Morning sky on Wednesday May 7 looking east as seen from Adelaide at 5:00 am ACST.  The radiant of the eta Aquariid meteor shower is shown.   Similar views will be seen elsewhere in Australia at the equivalent local time. (click to embiggen).


The eta Aquariids meteor shower, the debris from Halleys comet, peaks on May 6 at 07 UT (that's 5 pm AEST and 4:30 pm ACST, disappointingly in daytime) with a ZHR of 55. However, the shower radiant rises around 2 am, so you can't see the shower until the morning of Tuesday the 7th.

Although the actual peak is on 6th at 17:00 AEST, for Australia the best time to see the eta-Aquarids is in the early morning of the 7th, 8th and 9th. This year the first quarter Moon sets long before the radiant rises, so you should have almost ideal observing conditions if the cloud stays away.

How many will be seen on the 7th is not clear, but very good rates were seen last year, and dark sky sites may possibly see one meteor every two minutes or so. There were many bright ones reported with persistent trains. People in the suburbs may be will see less, but at least one every 6 minutes should be possible.

People in the suburbs should see a meteor around once every 6 minutes, and in the country about once every 3 minutes on the 7th, a bit more on the 8th and around the same rates as the 7th on the 9th. The radiant of the shower is about five handspans up from the eastern horizon, and three handspans to the left of due east at 4 am (see above for a spotter chart at 5 am). 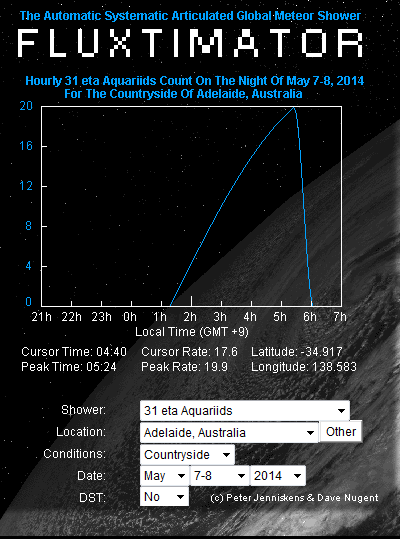 The sky will also be particularly beautiful, with the Milky Way stretching over the sky and constellation of Scorpius gracing the north-western sky. The radiant is not far above Venus, so you will have an attractive eastern horizon.

Use the NASA  meteor shower flux estimator for an estimate of what the shower will be like from your location (you may need to enter your longitude and latitude, surprisingly, while Adelaide and Brisbane are hard wired in, Sydney and Melbourne are not).

You need to choose 31 Eta Aquariids and remember to set the date to 7-8 or 8-9 May 2014. You can follow the progress of the shower at the IMO live Aquariid site.

What do you think about this possible 'meteor storm' from the remainings of comet 209P/LINEAR?

I know in the northern hemisphere they have the best opportunity to see it, but what about here in Australia? Would Camelopardalis be only visible during day time?

Southern Skywatch May, 2014 edition is now out!
Confirmed aurora seen in Tasmania and New Zealand ...
The Sky This Week - Thursday May 1 to Thursday May 8
My Solar Eclipse, Tuesday April 29 2014.
Yes, I saw the Partial Eclipse
Final Reminder: Partial Solar Eclipse Visible in A...
Reminder, Partial Solar Eclipse Visible in Austral...
See Venus and the crescent Moon, Morning Saturday ...
The Sky This Week - Thursday April 24 to Thursday ...
Dark Sky Events April 20-29