Observing the Opposition of Mars, 2014 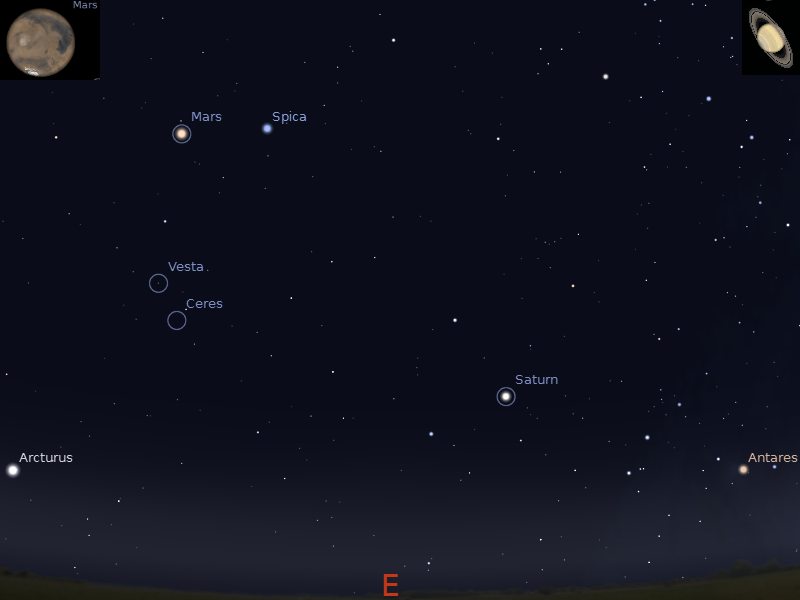 The evening sky facing east in Australia on April 9 at 21:00 AEST (9:00 pm AEST) showing the Mars, Spica, Saturn and Vesta and Ceres (click to embiggen) .

The Opposition of Mars is tonight (April 9). Mars is at its biggest and brightest tonight. After this the ruddy planet will be slowly growing smaller and dimmer but for the rest of the month and into May, it still repays close attention. This post will give you a brief guide to observing this fabled world. At least for those of us not clouded out by the tropical storm about to soak Queensland.

You don't need a telescope or complicated imaging equipment to observe Mars, although a telescope or binoculars helps. Before I describe observing Mars, a few words about the opposition. 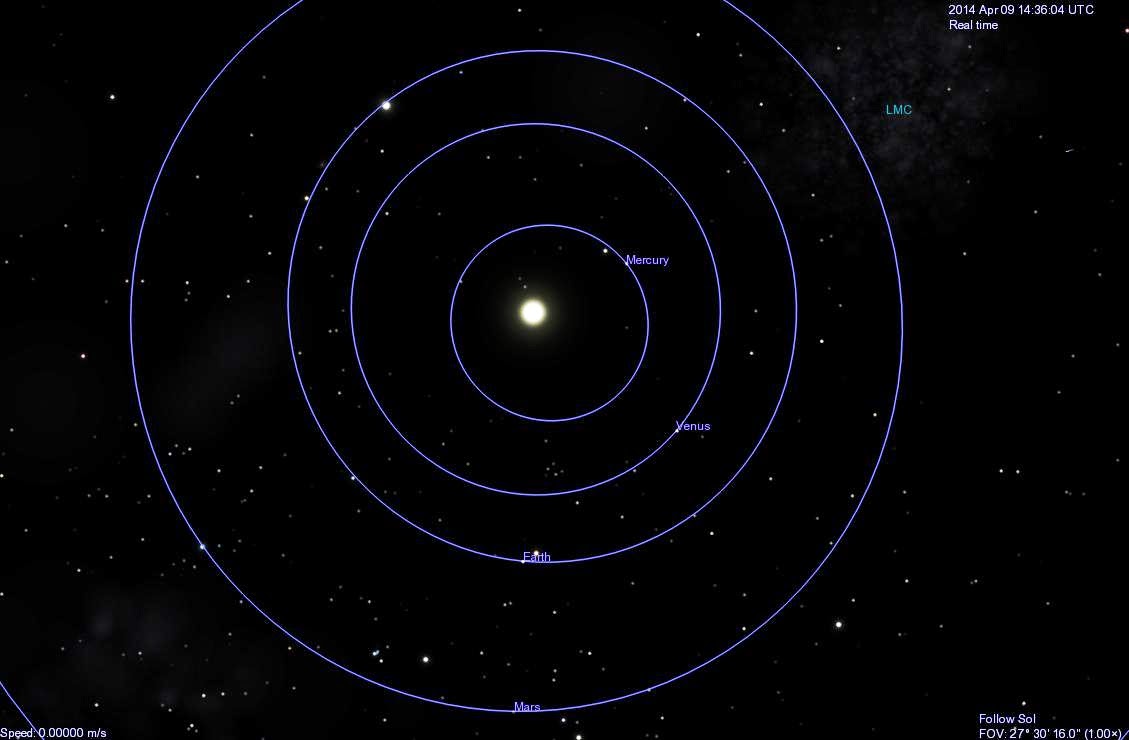 This year is a fairly poor opposition of Mars. However, it is better than the 2010 and the really poor 2012 opposition, and we will have to wait until 2018 for a really good one. What is an opposition? Opposition refers to when a planet is opposite the Sun in the sky. This can only happen to outer planets, as Earth must pass between the Sun and the planet. The Earth passes Mars in its orbit every 26 months, and at this time we get a good view of the Red Planet.

When Mars is also making its closest approach to the Sun, our view is very good indeed. While Mars is on average 228 million km from the sun, due to Mars's elliptical orbit this varies by 42 million kilometers. If Mars is at its furthest from the Sun at opposition, Mars is also around 99 million km from Earth, while if Mars is at its closest to the Sun during opposition, this value narrows to only 57 million km. Favorable oppositions occur only once in every 15 to 17 years. During the Great Opposition of 2003, Mars and Earth were a mere 55.8 million km apart. This degree of closeness will not be achieved again until 2287. This year, Mars and Earth will be 92.4 million km apart.

Oppositions in the early months of the year, when Mars is furthest from the Sun, are always poor. The best oppositions occur around August. This is very good for Southern observers, as Mars is high in the sky, and the winter sky is usually still and transparent, ideal conditions for watching Mars. This years opposition occurs during April. The conditions are reasonable for Southern Observers. The weather is cooling, reducing  atmospheric turbulence and making Mars's disk more observable. The polar cap is currently easily visible. The visible disk of Mars is now 15.1 arc seconds (an arc second is approximately 1/3600th of your fingerwidth). While this sounds astoundingly small, 15.1 arc seconds will give a smallish but passable disk in most amateur telescopes, even the small ones from Tasco.

What you can expect to see:

Unaided eye. The best observing will be from April to May. Mars rises around sunset, so Mars is best observed from 10 pm - midnight standard time for most of this period. At 11 pm AEST Mars is the brightest object in the sky, its distinctive red colour making it easy to identify (Jupiter having set). In April Mars is in the northeast, and 8 handspans above the northeastern horizon as seen from Melbourne (when your hand is held out flat, thumb in, with your arm outstretched, your hand covers 6 degrees of sky, see diagram at right, people in Adelaide and Sydney should add an extra handspan, Brisbane and Alice Springs an extra two and from Darwin Mars is 6 handspans high). See the diagram at the beginning of the post to see what you should expect.

Aside from just watching Mars every few nights you can do more detailed observation. Plotting the position of Mars every few nights (use a torch covered in red cellophane to stop your night vision being destroyed while you draw its position) will be interesting. In mid May Mars is stationary, and reverses direction during late May. This is called retrograde motion, and occurs due to Earth overtaking Mars in its orbit. Also, by comparing the brightness of Mars every couple of nights you can plot the fall in the brightness of Mars. 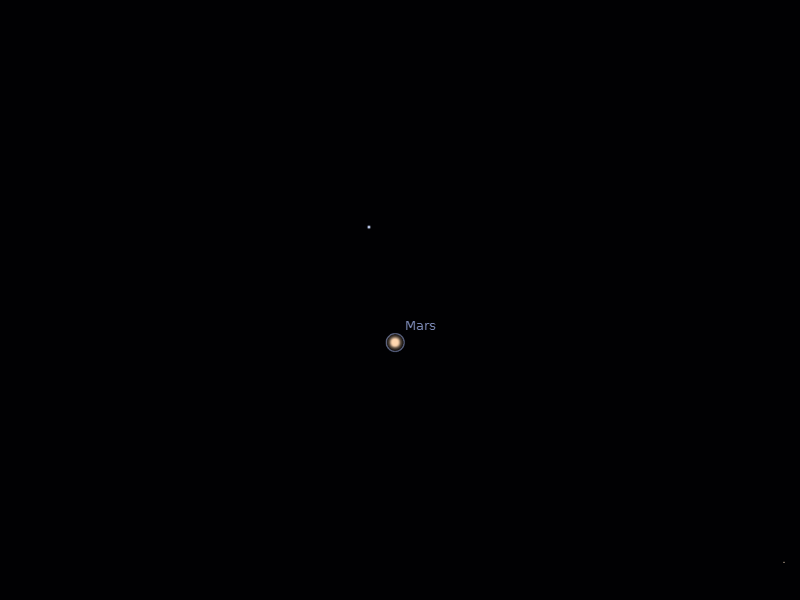 Mars as seen in 10x50 binoculars on April 9. It is not exciting.

Binoculars. Mars is not visible as a disk with 10 x 50 binoculars and larger this opposition. It is not near anything interesting until late June when it comes close to Spica.

Telescopes.The best time to observe Mars is when it is highest in the sky, unfortunately this occurs around midnight for a large proportion of best viewing times. Be prepared for some late nights if you want the best telescopic views.

Mars shows clearly visible markings in a 50 mm refractor telescope (if you have a 6 mm eyepiece), and significant detail can be seen in a 4" reflector, while 6" and 8" instruments will give better detail still. No current Earth-bound telescope can reveal the huge volcano, Mons Olympus, or the huge valley of Vale Marensus, which are seen in many of the spacecraft images. However, the polar caps will be seen clearly in even a small telescope. Significant features such as Syrtis major may be visible in 4" telescopes with good eyepieces under good observing conditions (see my webcam images from 2005). See the Google Mars Map for significant Mars features, or the JPL solar system simlulator to see what part of Mars is facing you when you are observing. 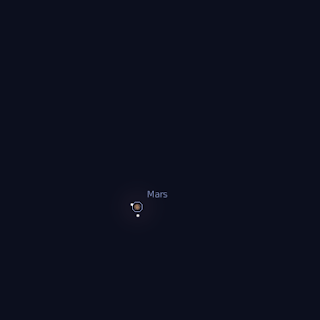 Mars as seen at this opposition through a 6" reflecting telescope with a 12 mm eyepiece. You will need a 6mm eyepiece to see the markings.

The Martian day is about 40 minutes longer than the Earth day, so if you observe at the same time each night, you can see the surface features rotating into and out of view. Dust storms can also occur, sometimes lasting days. Wind removal and deposition of the reddish, iron rich dust can also reveal or obscure features, so Mars's appearance can be somewhat different between each opposition.

Seasonal winds alternately covering and uncovering darker features with lighter dust were once interpreted as seasonal plant growth. Studying the Martian storms and the changing surface features is a valuable amateur activity.

So April to May is an excellent time to dust off that old telescope lying around in the garage, or to beg a view from a friend or neighbour with a telescope. Better yet, many astronomical clubs hold open nights, and this is an excellent opportunity to see this fascinating world in a decent telescope. Also, some of the local planetariums may be showing off Mars if they have telescopes.

For recording the appearance of Mars, all you need is a sheet of paper on a sturdy background, a pencil (or coloured pencils if you want to try recording the colors you see), a small torch covered in red cellophane and a watch. Make sure you and your telescope are located in a relatively dark place, and have modest circles predrawn on your paper (I use a 20 cent piece or my telescope eyepiece cap). Have your telescope out for a while beforehand so that it is at ambient temprature, to prevent air currents in the telescope from ruining the image. Record the date and time, and the weather (if it is windy, how much cloud, how much moonlight, what is the dimmest star you can see, etc.). Make sure you are wearing warm clothing, then make yourself comfortable at the eyepiece, preferably with a chair that allows you to sit and view comfortably, and, well, start drawing. It may take a few tries before you get the hang of recording what you see by red light, but you will feel a warm glow of accomplishment when you can.

Here are some links to Mars sites of interest: