So I'm standing in the carpark across from where SmallestOne goes for his tutoring. SmallestOne, his tutor, his class mate and her family are taking turns to use the eclipse glasses to see the Sun with a chunk out of it. Behind me my telescope sits neglected, maximum eclipse has passed and I still haven't set it up. Instead I'm showing people how to use a water cracker as a pinhole camera to see the cresent Sun.

I couldn't be happier. 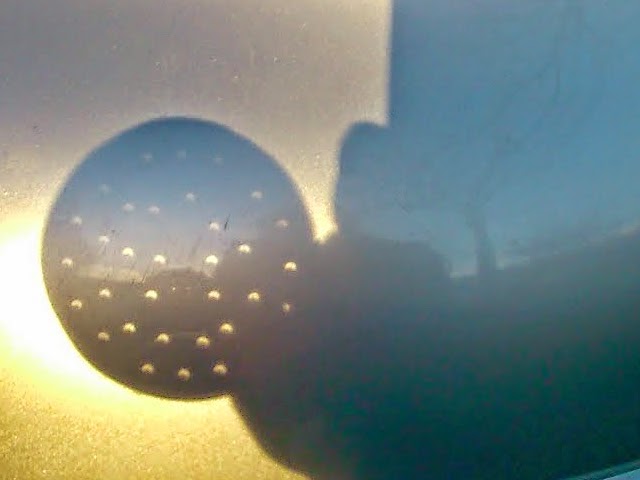 The day dawned with rain hammering down, the forecast looked grim, and today was SmallestOnes tutorial day. The Bettdeckererschnappender Weisle normally takes him, but her work has sent her gallivanting around the backblocks of South Australia and I'm househusbanding.

So instead of camping out somewhere overlooking the sea, I tossed as much gear as I could in the back of the car on the off-chance that the sky would clear and took SmallestOne to tutor while the clouds broke and scudded fitfully across the eclipsing Sun.

When I dropped him off I invited the tutor and the kids to come out and have a look at the eclipse, then wandered back to the car and began setting up my gear.

Then I got a phone call from radio 774 ABC Melbourne about the eclipse, Melbourne being clouded out I did a live "what the eclipse looks like" commentary with added water crackers (I picked that up off the net somewhere, I wish I could remember where, but it worked a treat). While I talk the clouds come and go, but have thinned out enough the the elipse Sun is glimpsed more often than not.

SmallestOne, his tutor, his class mate and her family then joined me in the car park, and other folk gather around to see what is happening, eclipse glasses are a passed around and people Ohh and Awww.

SmallestOne and his group go back to study, and I set up the telescope in the retreating wedge of light where the Sun shines between buildings. It takes me a while to set up, pointing a telescope at the Sun when you can't actually look at it or use the viewfinder is tricky, but I finally get set up and start snapping as more people wander up and ask what is going on.

Maximum eclipse is well and truly over but I don't care, SmallestOne has experienced his first Solar eclipse.