The Last Quarter Moon is Monday March 24. Earth is at Autumnal equinox on the 21st. Jupiter is the brightest object in the evening sky, visible all evening. Mars is prominent in the late evening sky. Saturn rises higher in the evening sky. The Moon is near Saturn on the 20th and 21st. Bright Venus is at its furthest distance from the Sun in the morning sky. The Moon is near Venus on the 27th.  Mercury is bright in the morning sky.  The asteroids Vesta and Pallas are visible in binoculars.

The Last Quarter Moon is Monday March 24. Earth is at Autumnal equinox on the 21st. 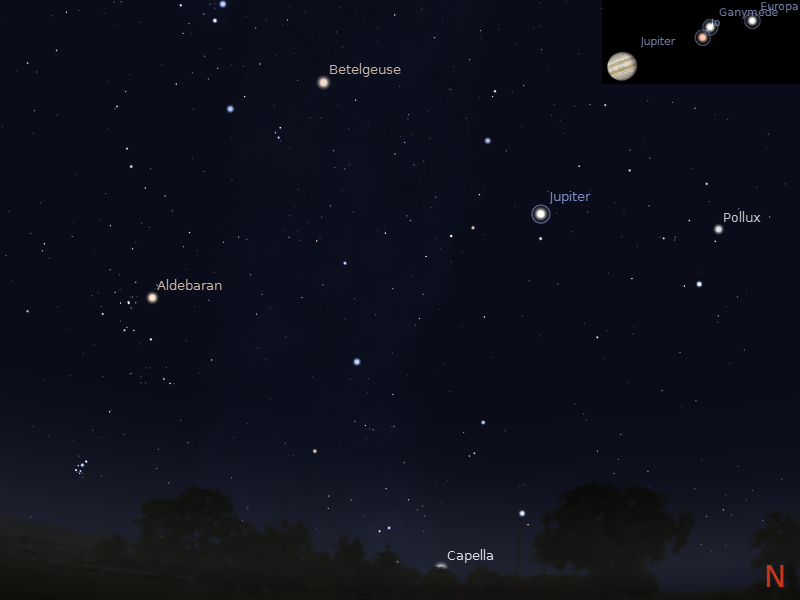 Evening sky on Sunday March 23 looking north-west as seen from Adelaide at 21:00 pm ACDST in South Australia. Jupiter is above the north-western horizon. The inset shows Jupiter's Moons at this time. Similar views will be seen elsewhere at the equivalent local time (click to embiggen).

Jupiter is in the constellation Gemini and is the brightest object in the evening sky. Jupiter was at opposition on the 6th of January, when it was brightest and closest to Earth, but will remain bright and easily observable in telescopes for several months.

In the early evening it is above the north-eastern horizon between the bright stars Castor and Pollux, the twins of Gemini, and the bright red star Betelgeuse. Jupiter is quite easy to see as the brightest object in the entire sky.  Jupiter's Moons are readily visible in binoculars. On Sunday all of Jupiter's Galilean Moons are lined up on one side of Jupiter's disk.

Mars rises around 20:30 pm local daylight saving time, but is still best seen when high in the early morning sky. Mars is rapidly brightening ahead of opposition next month, and is readily distinguishable as the bright red/orange object above the late evening horizon. Mars is is in the constellation of Virgo near the bright star Spica (see below). 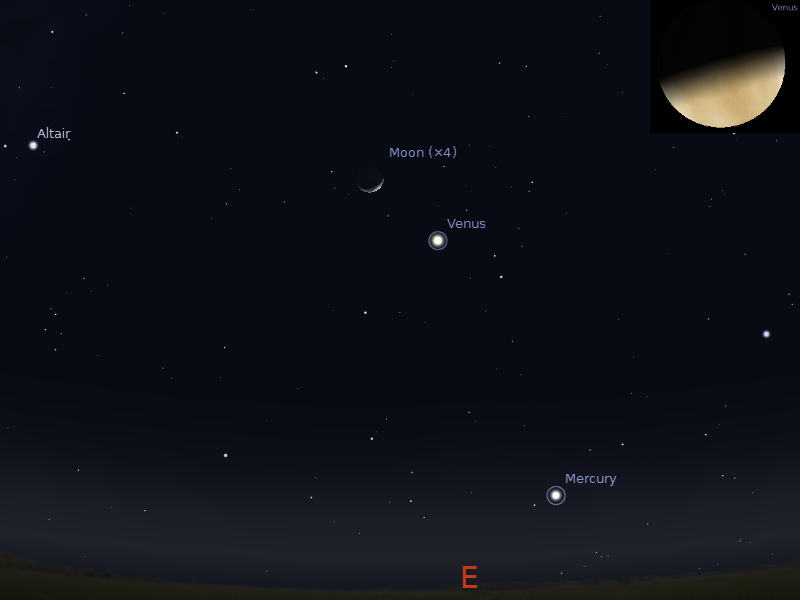 Morning sky on Thursday March 27 looking east as seen from Adelaide at 6:00 am ACDST in South Australia.  Venus is well above the horizon with the crescent Moon nearby. Mercury is relatively high above the horizon. The inset show the telescopic view at this time. Similar views will be seen elsewhere at the equivalent local time (click to embiggen).

Venus is in the morning sky, above the eastern horizon.  The brightest object in the morning sky, it is now easy to see and although it is past maximum brightness, it will dominate the morning sky for some months to come.  Venus rises progressively higher during the week, and at its furthest distance from the Sun on the 23rd. Venus  is now almost a half-Moon shape. The crescent Moon is near Venus on the 27th.

Mercury  is begining to sink towards the horizon but is still readily visible below Venus.

Saturn is rising higher in the evening sky, but is still best visible high above the northern horizon before dawn. Saturn is in Libra near the head of the constellation of the Scorpion.  It is  high enough in the early morning for decent telescopic observation. The Moon is near Saturn on the 20th and 21st. 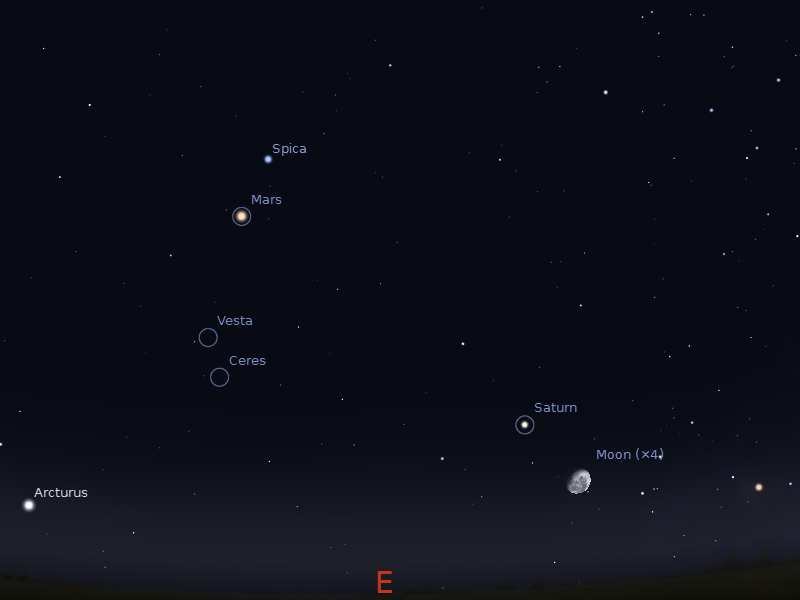 Evening sky on Friday March 21 looking east as seen from Adelaide at 23:00 pm ACDST in South Australia. The Moon forms a triangle with Mars and Spica. The asteroid Vesta is just below Mars, and easily visible in binoculars.  Similar views will be seen elsewhere at the equivalent local time (click to embiggen).

Two bright asteroids are now visible in binoculars in the evening sky. 2 Pallas and 4 Vesta. Later in March Vesta will become bright enough to be just visible to the unaided eye win dark sky locations.While Vesta is easily seen in binoculars, you will need to watch the same patch of sky in binoculars for a couple of nights to identify it by its movement. See here for more details on seeing Vesta and here for more details on seeing Pallas. Moonlight will make seeing these asteroid difficult in the first half of the week.

There are lots of interesting things in the sky to view with a telescope. Especially with Jupiter and Venus so prominent in the sky, and Mars and Saturn coming into view.  If you don't have a telescope, now is a good time to visit one of your local astronomical societies open nights or the local planetariums.

Comments:
I chanced upon your blog about a month ago and wanted to say thanks for all the interesting info you put up here. After years of casually gazing at the night and early morning skies I now find I'm stepping outside to actually look for the events you mention.