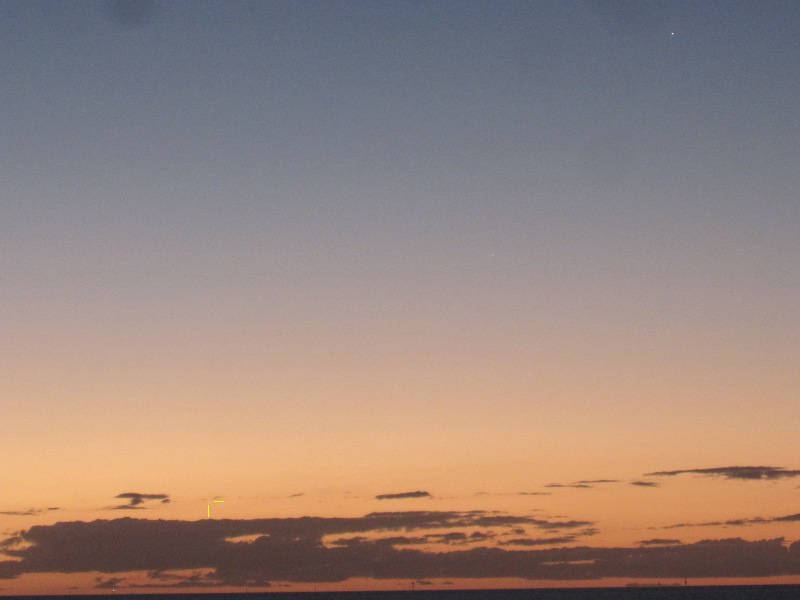 Venus and Jupiter as seen from Adelaide on 17 May, 2013. Imaged with a Canon IXUS, 1/4 sec exposure, ASA 400 3x Zoom at 5:55 pm ACST. Jupiter is the dot at the top right, Venus is bottom left, indicated by the yellow lines. You will need to click on the image to embiggen to see Venus clearly.

Venus is very close to the horizon, and deep in the twilight, but I could see it and Jupiter clearly at 5:40 pm. Venus was a mere three finger-widths from the horizon, and lowere by the time the sky was dark enough for a photo 15 minutes later.

Over the coming week Venus will rise higher in the sky, and Jupiter gets lower, with the pair meeting on the 28th and 29th. Before that Mercury will join them in the evening sky. The next two weeks will be quite interesting.

Comments:
I recently received (earier this week) my first real scope, a Nexstar. Looking forward to my 12v cable arriving and some clear skies. Will be good to utilise the in info in this blog a lot more in future. Thanks Ian.

I caught Venus as it was setting tonight. Looking good.
I'm going to show my sons cub pack Venus and Mercury this time around.
I wonder how many pages jaxson has to hit to earn his lunch.

At EldestOne's Play
The Sky This Week - Thursday May 16 to Thursday Ma...
Jupiter and the Moon, Close on Mothers Day, May 12...
Quick Images of the Solar Eclipse from Adelaide, 1...
Maximum Eclipse
Semi-live blogging the Partial Eclipse, May 10
Comet C/2011 L4 PanSTARRS, May 8
Reminder; Annular Eclipse Friday May 10, 2013
At a Concert Tonight
Aquariid Report, 7 May, 2013