The Last Quarter Moon is Thursday May 2. New Moon is Friday May 10 and there is an annular solar eclipse on this day. Jupiter is low in the early evening sky. Saturn is high in the evening skies. Mercury is lost to sight. Eta Aquariid meteor shower mornings April 7-9. Comet C/2012 F6 Lemmon is high in the morning skies. 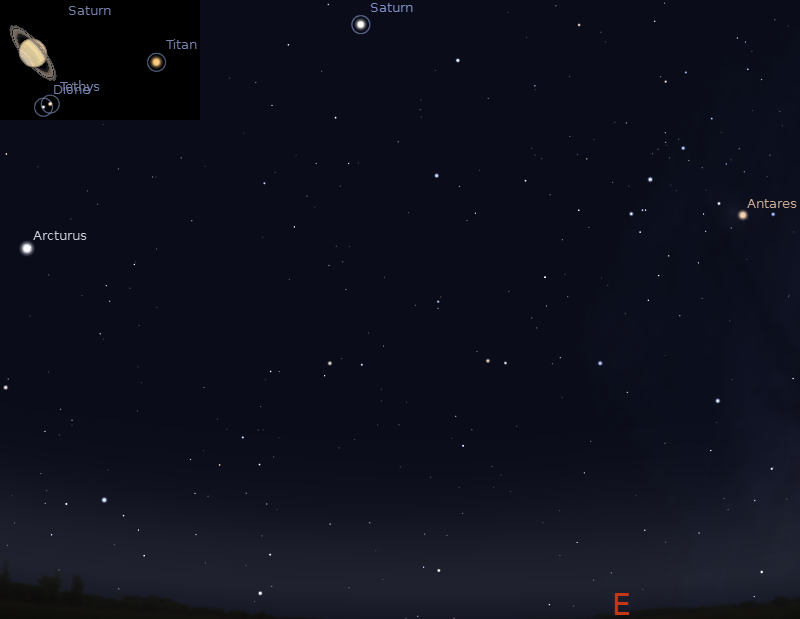 Sky on Saturday May 6 looking east as seen from Adelaide at 21:00 local time in South Australia. The left inset shows a telescopic view of Saturn at this time. Similar views will be seen elsewhere at the equivalent local time (click to embiggen).

The Last Quarter Moon is Thursday May 2.

On the morning of May 10, there will be an annular Solar eclipse. In an annular eclipse the Moon does not completely cover the Sun, and the Sun forms a thin ring around the Moon at maximum eclipse depth. The annular eclipse will be seen from a thin strip in WA, the Northern Territory and remote far north Queensland.

Everywhere else will see a partial eclipse of varying depth, the north-east coast of Australia having the best views. The eclipse starts shortly after sunrise. In places along the annular eclipse path, such as Tennant Creek (NT) and Musgrave Roadhouse (QLD), viewers will see a thin rim of Sun around the moon.

Elsewhere viewers will see between 13% (Hobart) - 83% (Cairns) of the Sun covered by the Moon.

Detailed timings and observing hints are in this post. 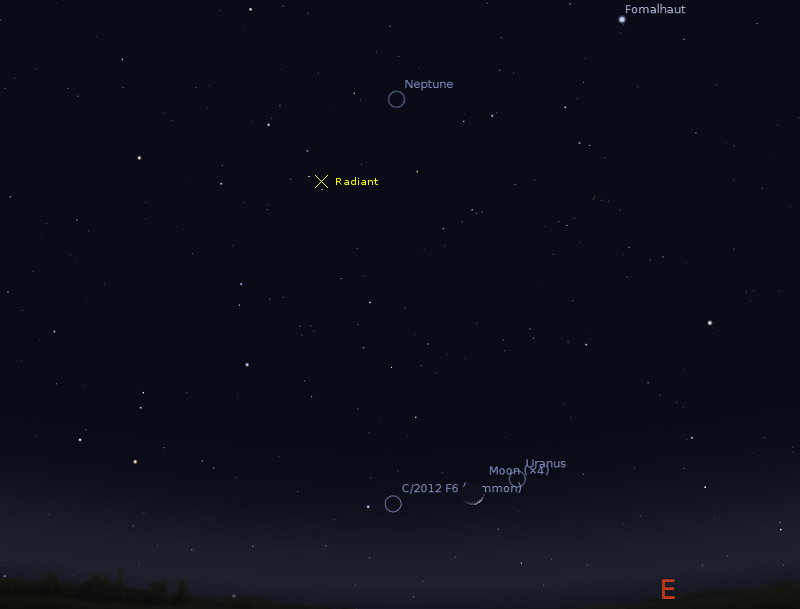 Morning sky on Tuesday May 7 looking east as seen from Adelaide at 5:00 am local time in South Australia showing the eta Aquariid meteor shower radiant, the crescent Moon, Uranus and comet Lemmon. Similar views will be seen elsewhere at the equivalent local time (click to embiggen).

The eta Aquariid meteor shower peaks on the morning of 7 May in Australia, although good rates will be seen on the mornings of the 8th and 9th.

The eta Aquarids are debris from Halleys comet. The radiant rises around 2 am May 8.

The actual peak is on the morning of the 7th, and reports coming out suggest an outburst may be in progress. For detailed viewing tips see this page.  for Australia the best time to see the eta-Aquarids is in the early morning of May 8 and 9, between around 4 and 5 am, when Aquarius is fairly high above the horizon and the crescent Moon is low. You may see between 1-3 meteors every 3 minutes at this time. The radiant of the shower is about five handspans up from the eastern horizon, and three handspans to the left of due east at 4 am (see diagram above). You will also see good rates on the 8th and 9th.

Comet C/2012 F6 Lemmon is in the morning skies. On the 8th it is not far from the crescent Moon. It has dimmed substantially, and you may need a small telescope to see it. 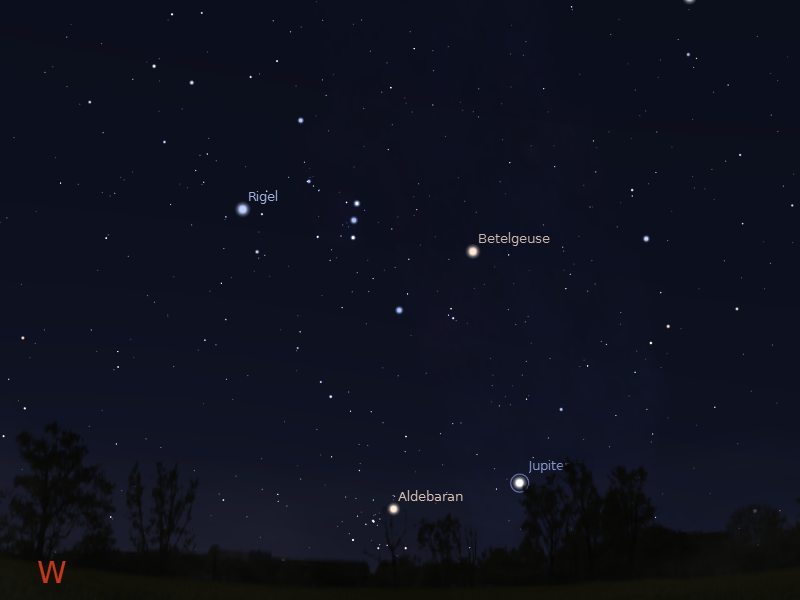 Evening sky looking west as seen from Adelaide at 18:30 pm local time on Saturday May 6. Similar views will be seen elsewhere at the equivalent local times indicated here.  Click to embiggen.

Jupiter is  low in the western early evening sky, being quite visible in the twilight.  Jupiter is moving away from the Hyades, and the red star Aldebaran into the horns of Taurus the Bull.

Jupiter, Aldebaran and the red star Betelgeuse in Orion form a triangle in the sky. With the Pleiades cluster and the constellation of Orion close by, this is a beautiful sight.

Jupiter is setting progressively earlier, by 7:40 pm local time, so the giant world is harder to see in a telescope. Jupiters' Moons are easily seen in binoculars, and can be followed from night to night changing position, but with a narrow window between twilight and Jupiter setting, you won't have time to see much action.

Comments:
Would we (South Australian's) be able to see the Eta Aquarids on the morning of May 4 and 5th? Or is it only going to be visible from the 7th onwards?

The 5th and 6th are before the peak, and strongly affected by the Moon being next to the radiant. You won't see very much at all.

Ah I see, no worries. Know of any hotspots in SA you recommend for viewing?

Is it possible to sign up to your weekly newsletters?

You can subscribe to this blog through the RSS reader link in your web browser of choice. Otherwise it is published weekly on Tuesday night (best look on Wednesday)