The First Quarter Moon is Saturday May 18. Mercury returns to the evening sky. Venus is visible low on the evening horizon. Jupiter is low in the early evening sky and is comes closer to Venus. Occultation of Spica May 22. Saturn is high in the evening skies. The Moon is close to Saturn on the 23rd. 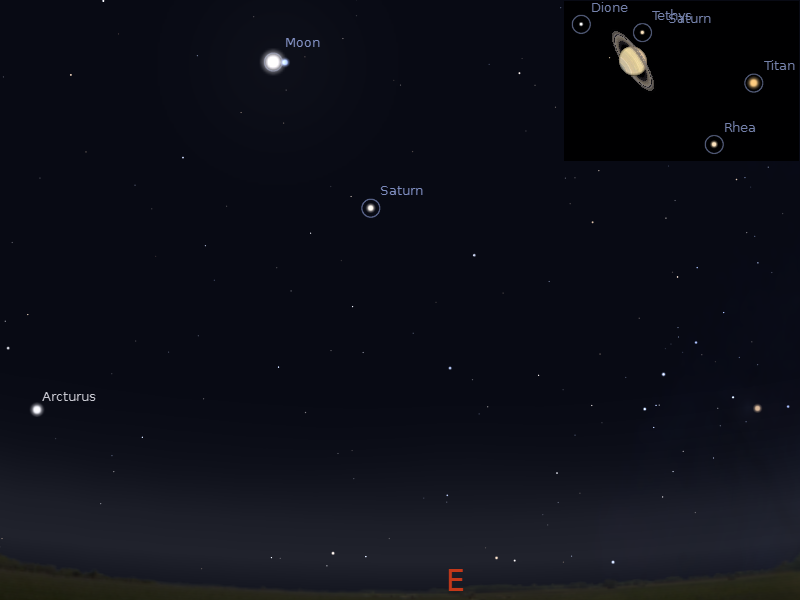 Sky on Wednesday May 22 looking east as seen from Adelaide at 19:30 local time in South Australia. The Moon is very close to Spica and there will be an occultation in northern Australia (see below).  The left inset shows a telescopic view of Saturn at this time. Similar views will be seen elsewhere at the equivalent local time (click to embiggen).

The First Quarter Moon is Saturday May 18.

Saturn is now easily visible above the eastern horizon before midnight in the constellation of Libra. Saturn climbs higher in the evening sky during the week, becoming easier to see. On Thursday the 23rd the Moon is close to Saturn. 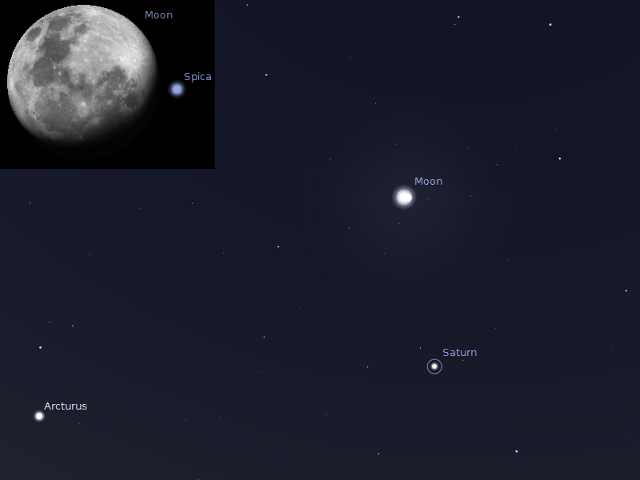 The evening sky facing north-east in Darwin on May 22 at 19:00 pm ACST showing the waxing Moon just about to cover Spica (alpha Virginis). (similar views will be seen from other locations north of Bundaberg at a similar local time eg 20:05 AEST Cairns). The inset shows a telescopic view of the Moon at 19:00 ACST, with Spica about to go behind the Moon.

The waxing Moon passes in front of the bright star Spica in the constellation of Virgo on the evening of May 22. Spica is a bright white star visible to the unaided eye (magnitude 1).

The occultation will only be seen from north-eastern Australia, anywhere north of a line running just below Darwin to Bundaderg.

Every where else will see Spica dramatically close to the Moon, it is well worth watching even if you don't have an occultation. In Adelaide and Alice Springs the Moon is less than half a lunar diameter from Spica, and in Brisbane it floats just above the surface, almost grazing. Nambour sees a graze starting at 20:01 AEST.

With the Moon nearly Full, this event is really best seen with binoculars or a small telescope (especially for the reappearance of the star on the bright limb of the Moon). If you have a tripod or other stand for your binoculars, it will be much easier to observe. Otherwise try and stabilise your binoculars on the back of a chair, or a car roof or something similarly solid. Set up about half an hour before the occultation to watch the star dissapear (so you are not mucking around with equiment at the last moment). 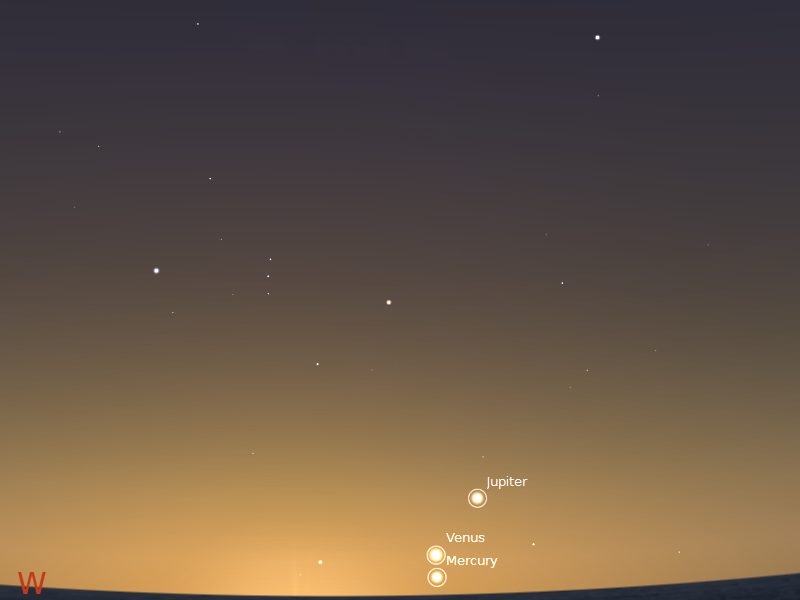 Evening sky looking west as seen from Adelaide at 17:45 pm local time on Thursday May 23. Similar views will be seen elsewhere at the equivalent local times indicated here.  Click to embiggen.

Mercury  returns to the evening skies next week, but is very low in the twilight. You will need a level, unobscured horizon to see it.


Bright white Venusclimbs higher in the evening twilight. It is still difficult to see early in the week, as it is quite close to the horizon, and you need a clear, level horizon like the ocean to see it at its best. As the week progresses it climbs towards Jupiter, making a fine sight in the twilight.

Jupiter is visible low in the early evening and rapidly descends into the twilight, heading towards a rendezvous with Venus and Mercury. Jupiter is setting progressively earlier, by 6:45 pm local time, so the giant world is now not really possible to follow in a telescope. However, with Venus and later on Mercury near it, it is well worth watching.

Comments:
This looks like another fun stargazing week. Looking forward to it. :)

Well the topic you choose really unique and information is ultimate you gave us. I completely enjoyed the post and hoping more post from you soon.
Accounts Software for Small Business

Jupiter and the Moon, Close on Mothers Day, May 12...
Quick Images of the Solar Eclipse from Adelaide, 1...
Maximum Eclipse
Semi-live blogging the Partial Eclipse, May 10
Comet C/2011 L4 PanSTARRS, May 8
Reminder; Annular Eclipse Friday May 10, 2013
At a Concert Tonight
Aquariid Report, 7 May, 2013
eta Aquariids in Outburst
The Sky This Week - Thursday May 9 to Thursday May 16