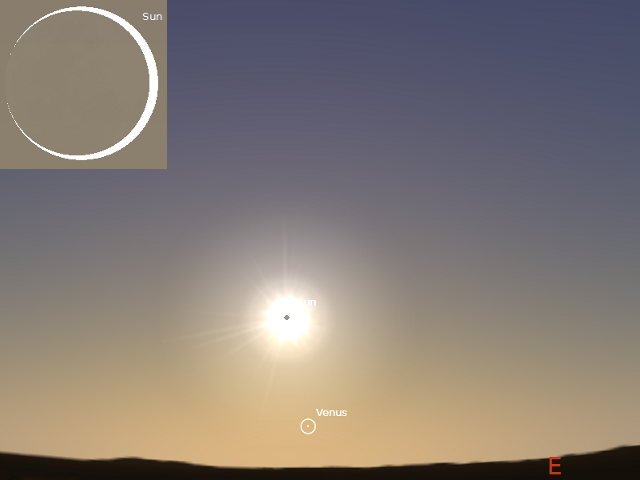 Annular Eclipse as seen from Tennant Creek at maximum eclipse, 8:48 am ACST on May 10.

Just a reminder that an annular Solar eclipse will take place early this Friday morning, May 10.

The annular eclipse starts in remote Western Australia, and the eclipse track passes  through the Northern Territory, over far North QLD, then passes over Papua New Guinea, the Solomon Islands and Gilbert Islands before reaching its greatest eclipse near Kiribati.

Outside the annular eclipse track, people will see a partial eclipse, with most of Australia, North Island New Zealand, Indonesia and many pacific nations such as New Britain, New Caledonia,  Micronesia, Vanuatu, Tuvalu and the Marshal Islands  seeing significant partial eclipses.

This Google Map from the NASA eclipse site will allow you zoom into the eclipse track. Click anywhere on the map and a pop-up will inform you when the eclipse is (in Universal Time, UT) and how much of the Sun will be covered. Or you may prefer a standard map with eclipse times in UT. Eclipse times for selected cities (Indonesia, Solomon Islands, New Zealand, Fiji, Honolulu etc.) along the path in UT are given in this table.

Full details of the eclipse as seen from Australia, and detailed safe viewing instructions are at my guide to the annular eclipse. I've also written an article for the ABC on viewing the eclipse.

Unlike a total eclipse, there is no time when it is safe to look at the sun without eye protection, do NOT look directly at the Sun, as irreparable eye damage or blindness can occur. Again, detailed safe viewing instructions are at my guide to the annular eclipse.

In Tasmania, the Queen Victoria Museum and Gallery is holding a safe eclipse viewing session. A live webcast will be put on by the SLOOH remote telescope.

For people coming to this page from Radio Australia, I've made the table below which show the eclipse times in local, rather than universal, time for selected localities. Other locations nearby will see similar eclipse times and durations. For the sites with Annular eclipses, the annular duration lasts between 4-5 minutes around the eclipse maximum. (Again, for Australian timings see my guide to the annular eclipse )

Do you have a source for teh eclipse maps that were used on teh abc article you wrote?

The maps were made in house by the ABC. You can get a dynamic Google Map of the eclipse locations here http://eclipse.gsfc.nasa.gov/SEsearch/SEsearchmap.php?Ecl=20130510