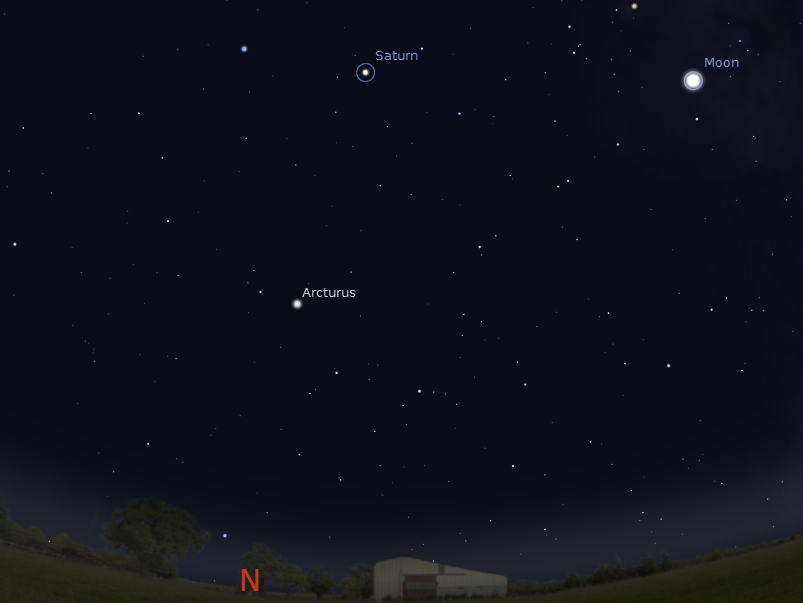 Location of Saturn at midnight on the 28th of April looking north from Adelaide. Similar views will be seen elsewhere in Australia at equivalent local times. Click to embiggen.

Saturn is at opposition on Sunday April 28. At this time it is biggest and brightest as seen from Earth.

Don't worry if you don't observe it on the 28th. Unlike Mars, which changes significantly in size and brightness between opposition and the months after, Saturn remains relatively big and bright for a long time after opposition. 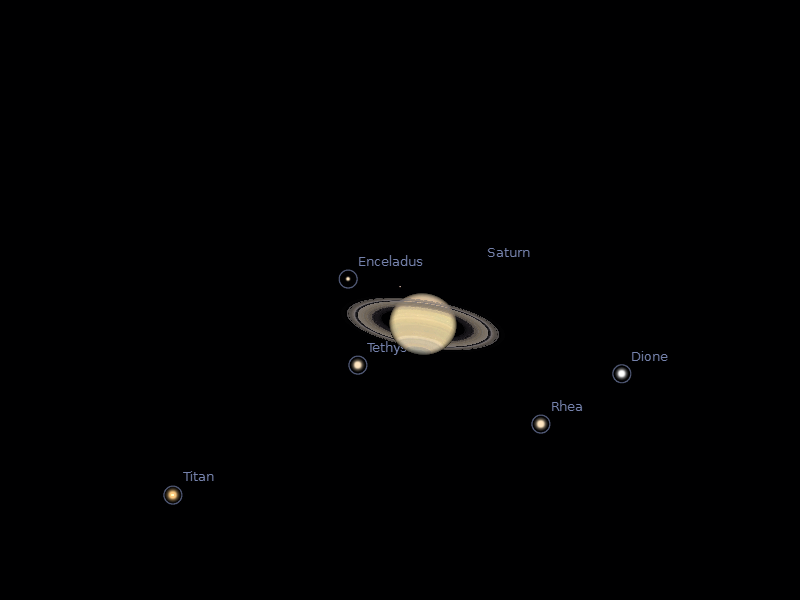 Simulation of  the telescopic view of Saturn at midnight on April 28.

The main impact of the opposition is that now Saturn will be high enough above the horizon for good telescopic views at convenient times. Saturn (and other planets) need to be reasonably high above the horizon of atmospheric turbulence will make seeing the features of the planet quite difficult.

Although Saturn is a magnificent object, most people aren't willing to stay up to 1or 2 am to see it. Now that we are at opposition, although the best views are around midnight, good viewing can be had from 9 pm on.

While Saturn is not particularly bright, it is still the brightest object above the north-eastern to northern horizons. It's golden colour also distinguishes it from white Spica, orange Arcturus and red Aldebaran; the other bright objects in the north-eastern to northern sky near Saturn.  In binoculars Staurn is a distinct oval, although you can't distinguish the rings. Unlike Jupiter, Saturn's Moons are not bright enough to see in binoculars, not even Titan.

In even small telescopes though, Saturn and its rings floating in space is magnificent. Titan can bee seen too to reslly see the banding on Saturn or the Cassini division and the smaller Moons requires a more serious telescope. But even in my 50 mm refrector the panet and its rings float like a jewel on the velvet of space.

If you are watching Saturn with a telescope, set the scope up at least a half hour before hand so the the telescope can cool down and minise thermal turbulence inside the telescope.

Yes, fixed it now, and the seconds vs minutes of arc confusion. Posting near midnight not a good idea.