The Full Moon is Wednesday March 27. Occultation of Spica in Northern Australia 28-29 March. Jupiter is prominent in the early evening sky, with a good series of satellite events on the 23rd. Saturn is in the late evening sky. Mercury brightens in the morning skies. 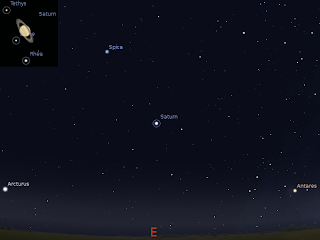 Sky on Saturday March 23 looking east as seen from Adelaide at 23:00 local daylight saving time in South Australia. The inset shows a telescopic view of Saturn at this time. Similar views will be seen elsewhere at the equivalent local time (click to embiggen).

The Full Moon is Wednesday March 27.

Saturn is now visible above the eastern horizon before midnight in the constellation of Libra. Saturn climbs higher in the evening sky during the week, becoming easier to see.

Saturn is still better telescopically in the early morning, but is a worthwhile evening target.

Mercury  becomes more prominent in the morning skies this week. It is now easy to see as the brightest object above the eastern twilight sky an hour before dawn. 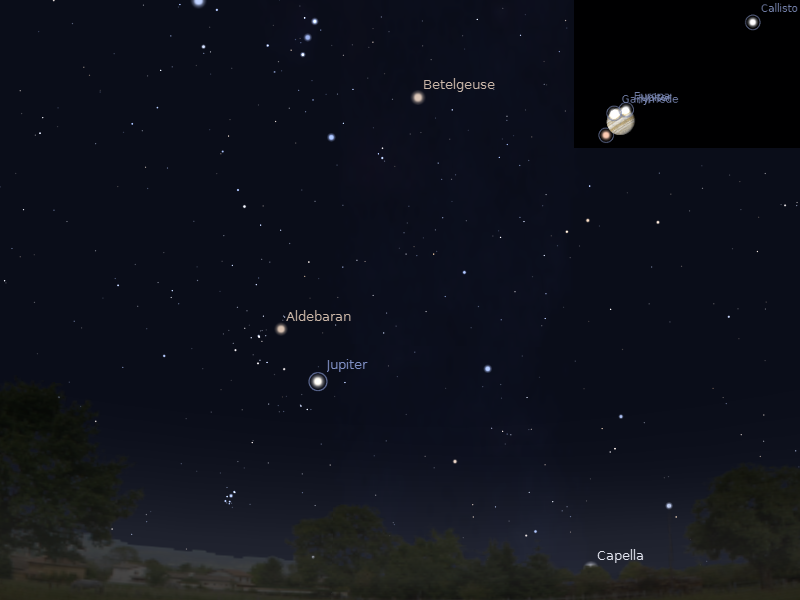 Evening sky looking North-west as seen from Adelaide at 21:00 pm local daylight saving time on Saturday March 23. The inset shows Jupiter's Moons at this time. There are a series of transits and an eclipse (see below for details) at this time. Similar views will be seen elsewhere at the equivalent local times indicated here.  Click to embiggen.

Now is still a good time to observe Jupiter with a telescope of any size in the evening. Jupiters' Moons are easily seen in binoculars, and can be followed from night to night changing position. On the 23rd there is a series of transits and an eclipse which is well worth watching in a telescope. In WA the first two events start before twilight. 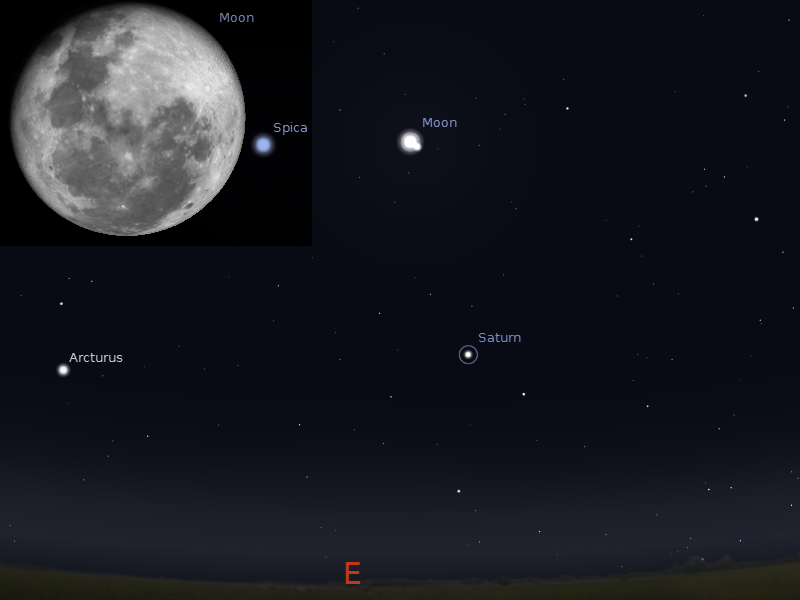 The morning sky facing north-east in Darwin on Thursday March 28 at 23:00 pm ACST showing the waning Moon just about to cover Spica (Alpha virginis,indicated by circle). (similar views will be seen from other locations north of Lismore at a similar local time eg midnight AEST Brisbane. Click to embiggen.

The waning Moon passes in front of the bright star Spica (magnitude 1) in the constellation of the Virgo the virgin on the morning of March 29 (eastern states) or late evening 28 March (central states).

This event is visible from sites north of a line running from Lismore NSW to the Kimberly in WA in Australia.

With the Moon two days past Full, this event is really best seen with binoculars or a small telescope (especially for the disappearance of the star on the bright limb of the Moon). If you have a tripod or other stand for your binoculars, it will be much easier to observe.