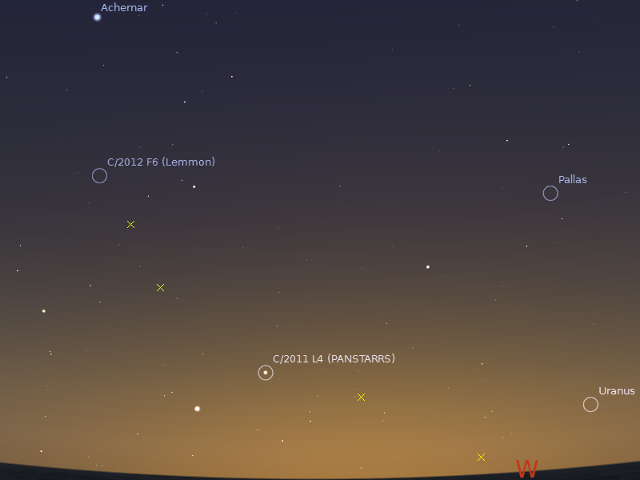 The image shows the evening sky at 8:30 pm ACDST Adelaide, the crosses show successive positions on March 5 and March 10 respectively. Although comet PanSTARRS comes closer to the horizon, twilight occurs earlier, so you should see it if you look around an hour after local sunset. Similar views will be seen elsewhere at equivalent local times. (click on image to embiggen).

The March edition of Southern Skywatch is now up. There's a little bit  of planetary action this month, and quite a bit of cometary action and an occultation.

Comet 2011 L4 PanSTARRS will be at it brightest, and already it is visible to the unaided eye with a short tail, low in the twilight horizon.

Venus is lost to view.

Jupiter is in the evening sky near the Hyades. Jupiter was at opposition on the 3rd, when it was largest as seen from Earth. This is still a good time for telescopic views of Jupiter. On the 18th the Moon and Jupiter are close.

The star Spica is occulted on the 28-29th in northern Australia.