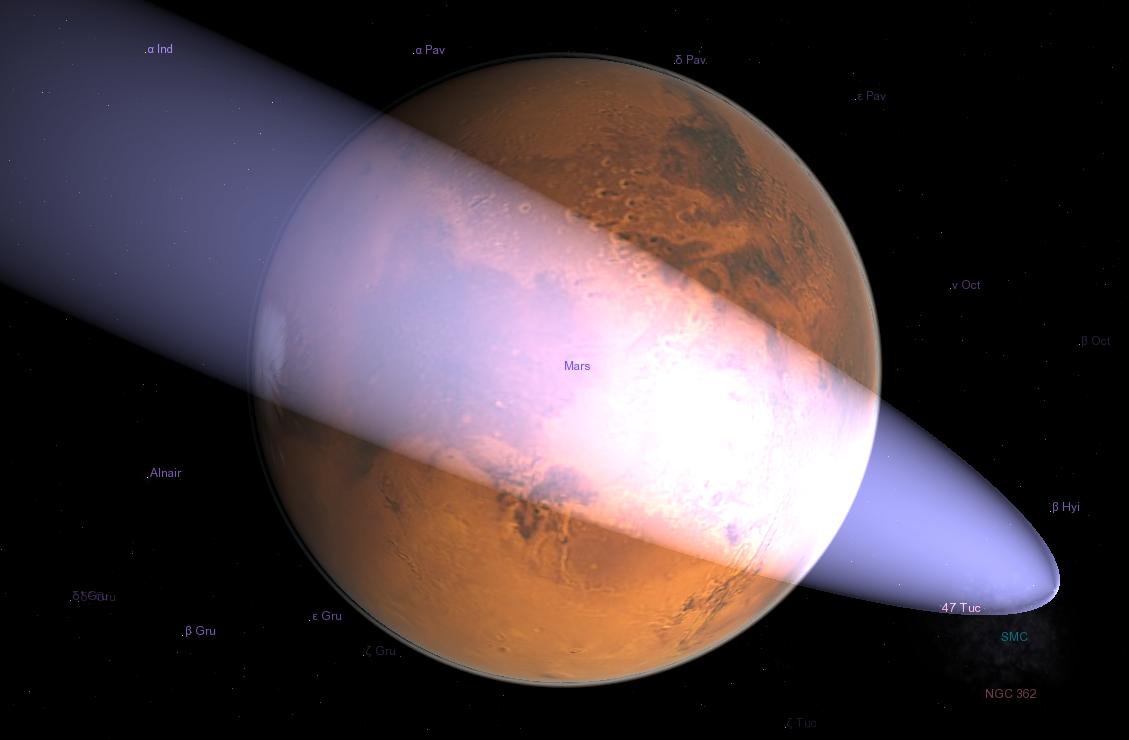 You may remember I posted  about a possible impact of the newly discovered comet C/2013 A1 (Siding Spring) with Mars. At the time, although an impact was possible the nominal orbit was pretty far from Mars.

Now after some more observations and refinement of the orbit, the orbital track has moved in a bit.

The error associated with this estimate still includes an impact though (and a maximum miss of 0.008 AU), so an impact can't be ruled out at this stage.

As I wrote before, as further observations are added and the orbit is refined, we will have a better idea of whether it will impact. Even if it doesn't impact it will look pretty good from Earth, and spectacular from Mars (probably a magnitude -4 comet as seen from Mars's surface), which might be observed by the plethora of orbiting spacecraft and the rovers. A collision would also be spectacular, but the rovers may not fare so well. 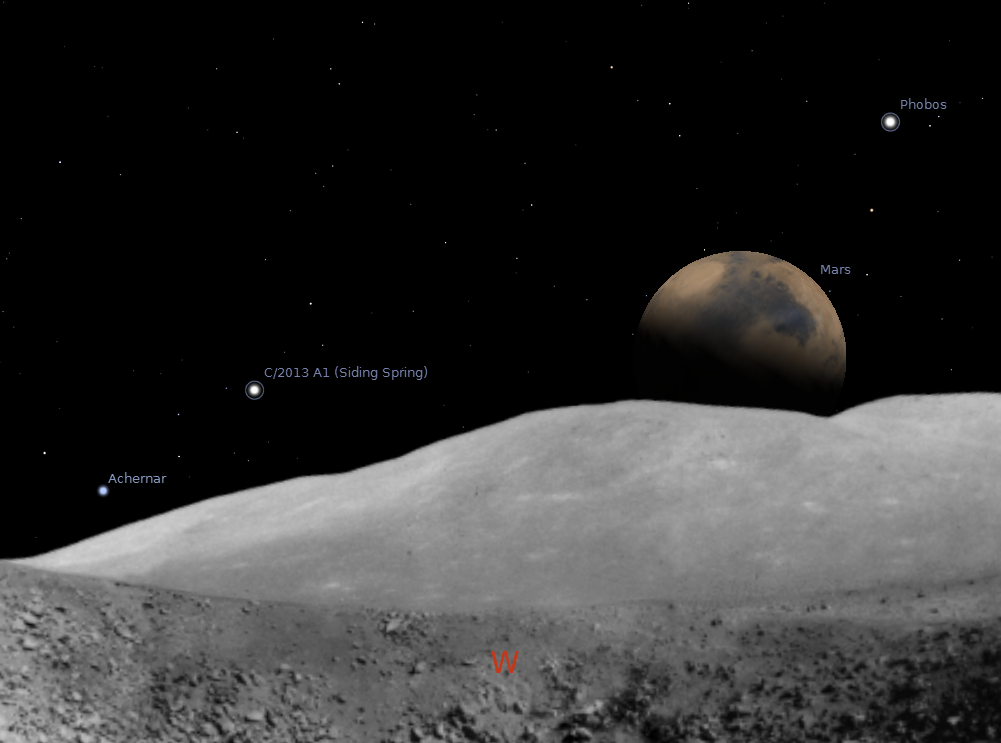 Simulation of the  of Mars and C/2012 A1 on October 19 as seen from Demios near closest approach.

Importing the latest elements into SkyMap or Stellarium suggests that from Earth we will see the comet and Mars less than a minute of arc from each other, which will look quite nice in telescope eye pieces (but hard to image as the comet will be a dim magnitude 8.5 and Mars bright).


Other takes on the possible collision from Leonid Elenin, Discovery News and IceInSpace.

UPDATE: Universe Today used my Mars simulation picture in one of their stories WOOT! They also quote Leonid. See it here.

Comments:
I notice that the image posted with this artical is showing the tail to be north/south over Mars, as the north pole is on the left of the image.

A new observation has brought the nominal distance even closer. 37,000km above the surface:

I was thinking about this a couple of hours ago on Slashdot.
It occurred to me ... since this is on a hyperbolic orbit (more energy than Solar gravity can hold in a stable orbit), then this must either be an extra-solar comet (Real interesting in itself! Quick, launch a sample-recovery mission!!), or it's the result of a "recent" interaction out in the Oort cloud. Those two (or more?) interacting bodies would have had the amount of energy appropriate to their orbits, and some energy transferred to C/2013 A1 (making it's orbit hyperbolic, and inward directed) from "SinNombre" ("No Name", for a name!). "SinNombre" must then have lost energy (elliptic orbit, lower mean orbital radius) and acquired an outward vector. To lower the mean orbital radius while heading outward, it must then have reached it's aphelion, and "soon" (I'm a geologist ; this is a geological "soon"!!) started coming back into the central solar system, on a vector that would pass even closer to the sun than C/2013 A1 does.
Does that analysis check out with people whose celestial mechanics is mathematical rather than my qualitative analysis? because it implies that "soon", there will be another C2013 A1 class comet, coming in on a similar vector.
Which is a testable prediction. Not very testable - a geological "soon" could be tens of thousands of years. But it's testable.
Comments, please? I know enough to know that I may well have got something badly wrong ; but I don't know what.

I don't understand. The last time I read about C/2013 A1, it was supposed to pass on the backside of Mars away from the Sun. Now suddenly NASA/JPL says it should pass on the sunward side of Mars. Split the difference, and you have a Mars impact, with a future potential catastrophic impact on our Earth by the resulting massive debris field, which could potentially equal 1/2 Trillion Tunguska events. So how did the trajectory of C/2013 A1 suddenly jump to the front sunward side of Mars? - RC

Does anyone knows where the comet goes after the Mars encounter?