The Sky This Week - Thursday January 31 to Thursday February 7

The Last Quarter Moon is Sunday February 3. Jupiter is prominent in the evening sky. Saturn is visible high in the morning sky and is visited by the Moon on February 3. Venus is low on the horizon. Comet C/2012 F6 (Lemmon) brightens. Comet C/2011 L4 PANSTARRS is visible in binoculars. 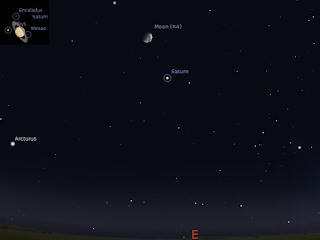 Morning sky on Sunday February 3 looking east as seen from Adelaide at 3:00 am local daylight saving time in South Australia. The inset shows a telescopic view of Saturn at this time. Similar views will be seen elsewhere at the equivalent local time (click to embiggen).

Saturn is now readily visible above the north-eastern horizon before dawn. Saturn climbs higher in the morning sky, becoming easier to see.  Saturn rises shortly after midnight, so it is high enough to be worthwhile in a small telescope in the pre-dawn dark. Saturn is in the constellation of Libra, and is visited by the Moon on Sunday February 3. 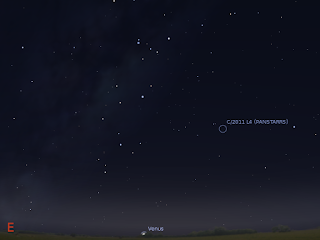 Morning sky on Sunday February 3 looking east as seen from Adelaide at 5:36 am local daylight saving time in South Australia (at the end of nautical twilight, an hour before dawn). Similar views will be seen elsewhere at the equivalent local time (click to embiggen).


Bright white Venus is now quite low above the eastern horizon, really only visible half an hour before sunrise and hard to see from cluttered horizons. Venus looks like a waxing Moon when seen through even a small telescope.

Venus starts the week in Sagittarius and ends in Capricornius.

On the 1st and 2nd of February PANSTARRS may be seen close to the brightish double star beta Sagittarii. 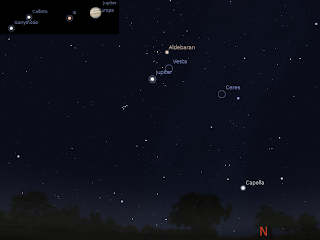 Evening sky looking North as seen from Adelaide at 22:00 pm local daylight saving time on Sunday, February 3. The inset shows Jupiter's Moons at this time. At this time the ISS is quite close to Jupiter as seen from Adelaide. The inset shows the view of Jupiter's Moons at this time. Similar views will be seen elsewhere at the equivalent local time.  Click to embiggen.


Jupiter is visible for most of the night, and is the brightest object in the evening sky. Despite opposition having just passed on the December the 3rd 2012, Jupiter is prominent in the northern early evening sky, being quite visible in the twilight. Jupiter is below the Hyades, near the red star Aldebaran. Jupiter remains near Aldebaran during the week, making it look as if the Bull has two eyes. 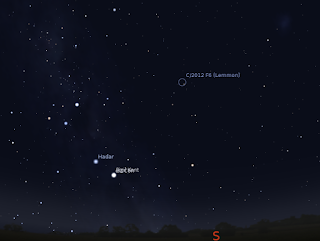 Comet C/2012 F6 Lemmon's location as seen from Adelaide at 22:00 ACDST on Saturday 2 January. Similar views will be seen elsewhere in Australia and New Zealand at equivalent local times.  (click to embiggen).

Comet  C/2012 F6 (Lemmon) is a nice little binocular comet, it is now traversing the minor , and will pass close to the Small Magellanic Cloud 0n February 14-15.

It is brightening rapidly, and is (just) visible to the unaided eye in dark sky locations. You will need to watch before Moon rise to see it with the unaided eye, and to see it at its best in a telescope or binoculars.