The Full Moon is Friday December 28. Earth is at perihelion on January 2. Jupiter is prominent in the evening sky. In the morning skies Venus is low on the horizon. Saturn is visible high in the morning sky. 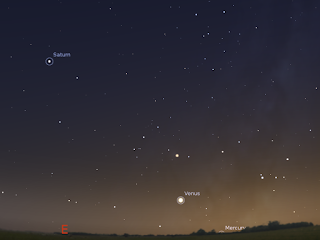 Morning sky on Sunday December 30 looking east as seen from Adelaide at 5:15 am local daylight saving time in South Australia. Saturn and Venus are drawing apart, Mercury is just on the horizon. Similar views will be seen elsewhere at the equivalent local time (click to embiggen).


The Full Moon is Friday December 28. Earth is at perihelion (the closest point to the Sun in Earth's orbit) on January 2.


Bright white Venus is now quite low above the eastern horizon,  and hard to see from cluttered horizons. Venus looks like a waxing Moon when seen through even a small telescope. Venus is in the constellation of Ophiuchus.

Saturn is now readily visible above the eastern horizon before dawn. Saturn climbs higher in the morning sky, becoming easier to see in the morning sky.  In the constellation of Libra, it continues to move away from Venus during the week.

Mercury  is low in the morning sky, but is very difficult to see in the twilight below Venus. You will need a flat, obscured horizon (like the ocean) to see it. By the end of the week it is lost in the twilight. 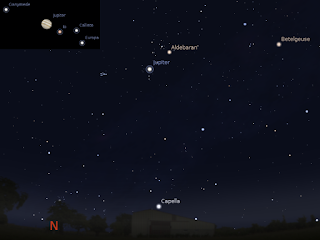 Evening sky looking North as seen from Adelaide at 22:00 pm local daylight time on Sunday December 30. The inset shows Jupiter's Moons at this time. Similar views will be seen elsewhere at the equivalent local time.  Click to embiggen.


Jupiter is visible all night long now. Despite opposition having just passed on the December the 3rd Jupiter is prominent in the north-eastern early evening sky, being quite visible in the twilight. Jupiter is below the Hyades, near the red star Aldebaran. Jupiter remains near Aldebaran during the week, making it look as if the Bull has two eyes.

Jupiter is easily seen in the late evening sky, rising around 6:00 pm local daylight saving time and is highest in the north by 11:00 pm. Now is a perfect time to observe Jupiter with a telescope of any size in the evening. Jupiters' Moons are easily seen in binoculars, and can be followed from night to night changing position.

Comments:
Hi Ian, I recently was reading an article on the 20 December and someone left a comment but it had nothing to do with the article, it was just random and I was hoping you could shed some light on it, they had wrote, 21 Dec stereo ahead gigantic comet 00:54:24, I don't know if this was real or not or just some scare tactics due to the 21 hype at the time, someone has said to me that the person could have seen earth not a comet or could of been c/2012 V4, I hope you can help with this please as I have not got a clue how to work stereo so excuse my ignorance on that. Thanks if you can help, or I thought it might have been Linear but I'm probably so wrong.

Thanks Ian that clears that up :-) and can you tell me if it is visible in the night sky and for how long. Thanks

Ok, thank you Ian for your kindness in replying back to me, very much appreciated.

Merry Sun Return Festival, Happy Calendrical Overturn
On The Ferry
Apres Apocalypse
Southern Skywatch January 2013 Edition is now up.
The End of the World, Mayan Calendars, and a whole...
Tau Ceti has Planets? maybe even an Earth-Like One...
Carnival of Space #280 is now Here!
The Sky This Week - Thursday December 20 to Thursd...
SmallestOne builds a Styracosarus
Chang'E Images Toutatis