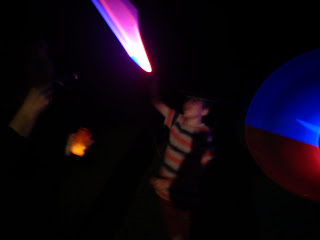 New Year with light sabers and glow in the dark bubble mixture.

Comments:
Hi Ian! Happy New Year! Just a question. I live in Port Augusta. My husband and I were waiting for the sunrise, looking in the sun's direction, when we noticed this slow moving meteorite-looking thing streaking down towards the Flinders Ranges. We watched it until it went behind the hills. Do you know what that would've been? I can send a photo.

Hi Ian
Recently someone said how has spaceweather.com not got any NEO listed for the whole of January, but JPL has a list of NEO for January, can you tell me what the difference is between spaceweather and JPL's list as the list that spaceweather has is just the same Neo's that JPl has and JPl has a lot more, I just don't really get why someone would say that as I just don't see any difference, can you point me in the right direction please. Thanks.

G'Day Danae. You have almost certainly seen one of the bright satellites, From the direction it was probably an Iridium satellite or the International Space Station. Around about what time was this?

G'Day Anonymous, the Spaceweather site only publishes NEO's that are closer than 60 earth-Moon distances away or are bright enough for amateurs to see with simple equipment. The ones on the JPL list that are not on the spaceweather list are likely to be magnitude 19 or higher, which require professional equipment to see.

Happy Baktun 13:00:00:00:10
A Different Kind of Star
I Have The Best Family (Christmas 2012 Edition)
An Australian Christmas
The Sky This Week - Thursday December 27 to Thursd...
Merry Sun Return Festival, Happy Calendrical Overturn
On The Ferry
Apres Apocalypse
Southern Skywatch January 2013 Edition is now up.
The End of the World, Mayan Calendars, and a whole...