The Last Quarter Moon is Monday October 8. Mars enters the head of the Scorpion. Saturn, Mercury and the star Spica form a  triangle low in the western evening sky with Mercury being closest to Saturn on the 5th.  In the morning skies Jupiter and Venus can be readily seen amongst some beautiful constellations. On the morning of the 6th Jupiter is occulted by the Moon. 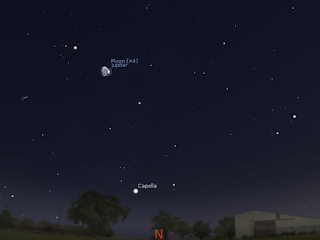 Morning sky on Saturday October 6 looking north as seen from Adelaide at 5:00 am local time in South Australia. The Moon is about to graze Jupiter. Jupiter is below the Hyades and makes a long triangle with the red stars Betelgeuse and Aldebaran. Venus (off right not in this image) is very close to the bright star Regulus. Similar views will be seen elsewhere at the equivalent local time (click to embiggen).

Jupiter is easily seen in the early morning sky. Jupiter is below the Hyades  and stays in roughly the same position for most of the week. Jupiter is not far from the waning Moon on the 5th.

On the 6th Jupiter is occulted by the Moon as seen from the South-eastern states.This occurs in daylight, but can still be viewed in telescopes and binoculars if care is used to not accidentally point at the Sun.

Venus is in  the constellation of  Leo, it starts the week near the bright star Regulus but moves away over the rest of the week. 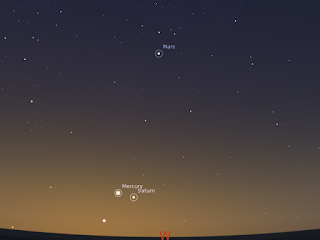 Evening sky looking west as seen from Adelaide at 7:00 pm local time on Sunday September 30. Mars,  Saturn and the bright star Spica form a long triangle, with the Mercury close to Spica. Similar views will be seen elsewhere at the equivalent local time.  Click to embiggen.

Saturn is just above the north-western horizon, not far from the bright star Spica. Saturn is low in the twilight, which is not good for telescopic observation.

Saturn was at opposition, when it is biggest and brightest as seen from Earth, on the 16th of April. Now you only have a very short viewing time before Saturn is too low to observe, and telescopic views are even more limited. Saturn sets around 8:00 pm local time

Mercury is low in the twilight, on the 5th  it is close to the Saturn.

Mercury, Saturn and the bright white star Spica from an attractive triangle in the evening sky, although you will need a low level horizon to see them at their best.


Mars starts the week in the constellation of  Libra but soon moves into Scorpius. Mars is brightest object in the north-western sky, and its distinctive red colour makes it easy to spot. Mars sets shortly after 10:00 pm local time.

Over the week,  Mars moves closer towards the head of Scorpius the Scorpion. On the 10th and 11th it is in the head of the Scorpion, close to the bright star delta Scorpii