The New Moon is Monday October 15. Mars comes close to the bright red star Antares in the Scorpion. Mercury rises higher in the western evening sky. The thin crescent Moon visits Mercury on the 17th, and Mars on the 18th. Jupiter is visible in the late evening sky. In the morning skies Jupiter and Venus can be readily seen amongst some beautiful constellations. On the morning of the 13th  the thin crescent Moon is near Venus. 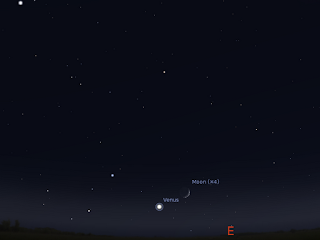 Morning sky on Saturday October 13 looking east as seen from Adelaide at 5:30 am local daylight saving time in South Australia. The crescent Moon is above Venus. Similar views will be seen elsewhere at the equivalent local time (click to embiggen).

The New Moon is Monday October 15.

Jupiter is easily seen above the norther horizon in the early morning sky. Jupiter is below the Hyades, between the red star Aldebaran and the dimmer blue white star Elnath. Jupiter stays in roughly the same position for most of the week.

On the 13th, starting at 1:04 am AEDST, there is a nice series of transits and shadow transits of Jupiters Moons, with the great red spot in sight.


Venus is in  the constellation of  Leo, not far from the bright star Regulus. Venus moves further away away over the rest of the week. Venus is now relativey low to the horiozn, it is still clearly visible in twlight skies, but will become harder to see over the coming weeks. It will still be bright, but hard to see from cluttered horizons.

On the morning of the 13th  the thin crescent Moon is near Venus. This is also an excellent opportunity to see Venus in the daylight. 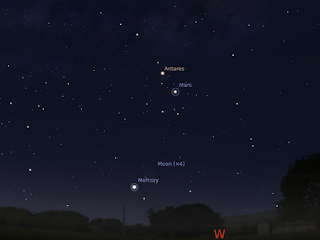 Evening sky looking west as seen from Adelaide at 8:30 pm local daylight time on Wednesday October 17. Mars is in the head of the scorpion, coming close to Antares. Mercury is close to the crescent Moon. Similar views will be seen elsewhere at the equivalent local time.  Click to embiggen.


Mercury is rapidly brightening and  rapidly rising in the sky. This will be the best time to see the swift inner planet in the evening this year. It is currently the brightest object just above the western horizon towards the end of twilight.

On the 17th  Mercury is close to the thin crescent Moon.

Mars continues to move through Scorpius. Mars is third brightest object in the western sky (after Mercury and the red star Antares, which is just a little brighter than Mars). Mars's distinctive red colour makes it relatively easy to spot, just don't confuse it with red Antares above it. Mars sets shortly after 11:00 pm local daylight saving timetime.

Mars starts the week in  the head of Scorpius the Scorpion. On the 11th it is close to the bright star delta Scorpii. Over the week Mars comes closer to the bright red star Antares (whose name means "rival of Mars"). On the 18th the crecent Moon forms a line with Mars and Antares.

Aurora Happening Now in Tasmania
Open Day at Siding Spring Observatory with Astrosw...
My Images of the Jupiter-Moon Graze, October 6, 2012
Occultation of Jupiter 6 October, semi-live blogging
Occultation/Graze of Jupiter by the Moon Saturday ...
The Sky This Week - Thursday October 4 to Thursday...
Animatronic Dinosaurs (on an island)
Carnival of Space #268 is Here!
The Sky This Week - Thursday September 27 to Thurs...
Just in Case You are Looking for Elenin and Earthq...