The Last Quarter Moon  is Saturday September 8. Mars, Saturn and the star Spica form a triangle in the western evening sky. In the morning skies Jupiter and Venus can be readily seen amongst some beautiful constellations. On the 8th and 9th the waning Moon visits Jupiter, on the 12 and 13th the crescent Moon is near Venus. This is a good chance to see Venus in the daylight. 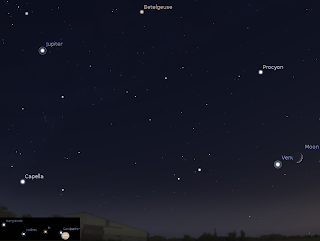 Morning sky on Thursday September 13 looking north-east as seen from Adelaide at 5:30 am local time in South Australia. Jupiter below the Hyades makes a long triangle with the red star Betelgeuse. Venus is near the crescent Moon. The left inset shows the location of the Moons of Jupiter at this time. Similar views will be seen elsewhere at the equivalent local time (click to embiggen).

Jupiter is now easily seen in the early morning sky. Jupiter is below the Hyades  and stays in roughly the same position for most of the week.

Jupiter's Moons are a delight any-time, but on the morning of the 13th there is a transit of  Europa. Well worth a look in even a small telescope.

Bright white Venus is still high above the eastern horizon, but is sinking lower over the week. Venus looks like a waxing Moon when seen through even a small telescope.

Venus enters the constellation of Cancer the Crab, and by the end of the week is within binocular distance of the Beehive cluster.

On the 8th and 9th the waning Moon is close to Jupiter, being closest (5 degrees) on the morning of the 9th. After sunrise this is an excellent time to try and see Jupiter in the daylight, using the Moon as your guide.

On September 11 the Moon is between Jupiter and Venus, and on the 12th and 13th the crescent Moon is close to Venus, being closest on the 13th at 5 degrees away. This is also an excellent opportunity to see Venus in the daylight.

By the end of the week Mars is within binocular distance of the broad double star Zubenelgenubi (alpha2 Librae). In binoculars red Mars and the white and yellow double star will look beautiful. 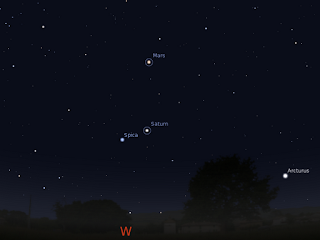 Evening sky looking west as seen from Adelaide at 7:30 pm local time on Saturday September 8. Mars,  Saturn and the bright star Spica form a triangle. Similar views will be seen elsewhere at the equivalent local time.  Click to embiggen.

Saturn was at opposition, when it is biggest and brightest as seen from Earth, on the 16th of April, but now is still a good time for telescopic views of this ringed world in the early evening, although you will have only a very short viewing tie before Saturn is too low to observe. Saturn sets around 9:00 pm local time


Mars, Saturn and the bright white star Spica from a long but attractive triangle in the evening sky. Over the week, the triangle becomes larger as Mars moves away from Saturn and Spica and towards Zubenelgenubi (alpha2 Librae).

Things You Need To Do Before Announcing You have F...
Aurora happening in Tasmania NOW!
Carnival of Space # 265 is here!
Mars, Saturn and Tiangong 1 (2 September 2012)
I have the Best Family (Fathers Day Edition 2012)
Carnival of Space #264 is here!
Blue Moon Tonight
Blogging suspended, at Bill Bailey Concert
Zooming (in) to the Moon
The Sky This Week - Thursday August 30 to Thursday...