The First Quarter Moon is Sunday September 23. The Earth is also at spring Equinox on the 23rd. Mars, Saturn and the star Spica form a very long triangle in the western evening sky.  In the morning skies Jupiter and Venus can be readily seen amongst some beautiful constellations. 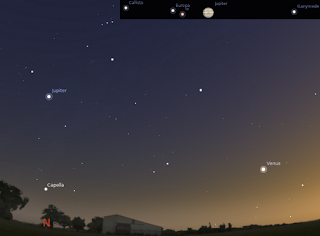 Morning sky on Sunday September 23 looking north-east as seen from Adelaide at 5:30 am local time in South Australia. Jupiter below the Hyades makes a long triangle with the red stars Betelgeuse and Aldebaran. The right inset shows the location of the Moons of Jupiter at this time. Similar views will be seen elsewhere at the equivalent local time (click to embiggen).

The First Quarter Moon is Sunday September 23. The Earth is also at spring Equinox on the 23rd.

Jupiter's Moons are a delight any-time, but on the morning of the 27th there is a shadow transit and transit of Io. Well worth a look in even a small telescope.

Bright white Venus is still reasonably high above the eastern horizon, but continues sinking lower over the week. Venus looks like a waxing Moon when seen through even a small telescope.

Venus is in  the constellation of Cancer the Crab, but rapidly moves towards Leo, and the bright star Regulus.


Mars was at opposition on March 4, when it was biggest and brightest as seen from Earth. Sadly, this is a poor opposition and Mars will be fairly small in modest telescopes. 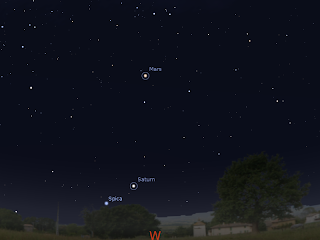 Evening sky looking west as seen from Adelaide at 7:30 pm local time on Saturday September 22. Mars,  Saturn and the bright star Spica form a long triangle. Similar views will be seen elsewhere at the equivalent local time.  Click to embiggen.

Saturn is just above the north-western horizon, not far from the bright star Spica. Saturn is only  high enough in the northern sky for telescopic observation for a very short time in the early evening, although not for long.

Saturn was at opposition, when it is biggest and brightest as seen from Earth, on the 16th of April. Now you only have a very short viewing time before Saturn is too low to observe, and telescopic views are even more limited. Saturn sets around 8:30 pm local time


Mars, Saturn and the bright white star Spica from a long but attractive triangle in the evening sky. Over the week, the triangle becomes larger as Mars moves away from Saturn and Spica and towards the head of Scorpius the Scorpion.