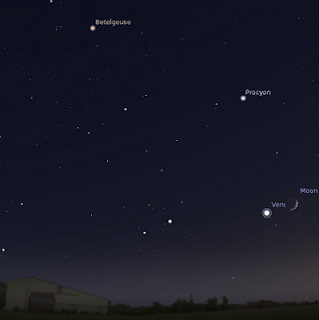 The eastern horizon from Adelaide at 5:30 am on September 13 (similar views will be seen elsewhere in the Southern Hemisphere at around an hour before sunrise ).

The September edition of Southern Skywatch is now up. There's still lots of planetary action this month.

Venus is in the morning sky not far from Jupiter and is close to the crescent Moon on the 13th.

Jupiter is in the morning sky near the Hyades, on the 9th the crescent Moon and Jupiter are  close (time to look for Jupiter in the daylight).

Mars forms a triangle with Saturn and the bright star Spica . Mars is close to the crescent Moon on the 20th.

Mercury is lost in the twilight.
Variable star Mira is coming down from maximum brightness.

The Sky This Week - Thursday September 6 to Thursd...
Things You Need To Do Before Announcing You have F...
Aurora happening in Tasmania NOW!
Carnival of Space # 265 is here!
Mars, Saturn and Tiangong 1 (2 September 2012)
I have the Best Family (Fathers Day Edition 2012)
Carnival of Space #264 is here!
Blue Moon Tonight
Blogging suspended, at Bill Bailey Concert
Zooming (in) to the Moon