There are Three Mars Rovers Hidden in this Picture; Can You Find Them? 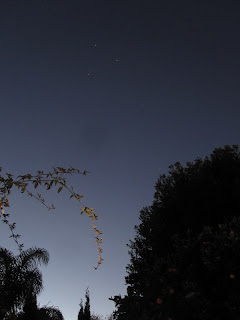 Mars, Spica and Saturn form a triangle in the western evening sky (Mars is the bottom most bright object, click to embiggen).

The difference between this picture and the ones here and here, is that Curiosity is resting safely on the surface in Gale Crater.

Now Opportunity has another companion, which will trundle around for at least two years if all goes well (My title is wrong by the way, I forgot Sojourner, that makes 4. See this picture for all three generations. Hat tip to Stuart)

Watching the landing was an immense buzz, XKCD sums up today perfectly. (Yes, we landed a rover the size of a car on Mars using a SkyCrane! How cool is that! Antidote here)

Now we wait for the images and science results, the first images from the touchdown are here. I've put two of the best up below. More images coming at 18:00 UTC (that's 4 am AEST)

UPDATE: HiRISE has confirmed that they imaged Curiosity on its way down, pictures not released yet, they will be released at the 16:00 UTC press briefing. 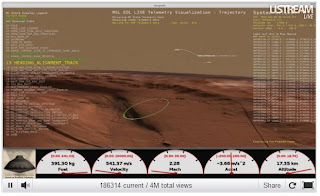 Simulation of Landing site taken from USTREAM of landing.

Live blogging Curiosity's Landing
Mars, Saturn and Spica, 5 August 2012
What will Earth Look Like from Curiosity's Landing...
Watch Curiosity Land (or not) on Mars
Foggy Morning
The International Space Station, 31 July 2012
Southern Skywatch August 2012 Edition Up
The Sky This Week - Thursday August 2 to Thursday ...
Carnival of Space #260 is Here!
A Photo of Crux