The Sky This Week - Thursday August 30 to Thursday September 6

The Full Moon is Friday August 31 and it is a Blue Moon. Mars, Saturn and the star Spica form a triangle in the western evening sky. In the morning skies Jupiter and Venus can be readily seen amongst some beautiful constellations. 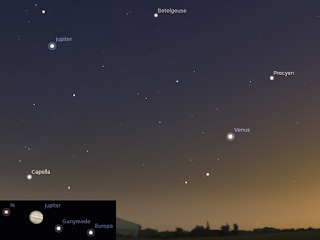 Morning sky on Saturday August 1 looking north-east as seen from Adelaide at 6:00 am local time in South Australia. Jupiter below the Hyades makes a long triangle with the red star Betelgeuse and Venus. The left inset shows the location of the Moons of Jupiter at this time. Similar views will be seen elsewhere at the equivalent local time (click to embiggen).

Jupiter is now easily seen in the early morning sky. Jupiter is below the Hyades over the week.

Jupiter's Moons are a delight anytime, but on the morning of the 4th there is a transit of Io and an eclipse of Europa. Well worth a look in even a small telescope.

Bright white Venus is  high above the eastern horizon. Venus looks like a waxing Moon when seen through even a small telescope.

Jupiter, Venus and the red star Betelgeuse in Orion form a long triangle in the sky. Venus, Betelgeuse and Procyon form another triangle and there is a larger triangle with Jupiter, Sirius and Venus.

Mars is in the constellation of Virgo but enters Libra by the end of the week. Mars is brightest object in the north-western sky, and its distinctive red colour makes it easy to spot. Mars sets shortly before 10:30 pm local time. 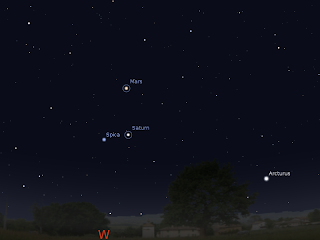 Evening sky looking west as seen from Adelaide at 9:00 pm local time on Saturday September 1. Mars,  Saturn and the bright star Spica form a triangle. Similar views will be seen elsewhere at the equivalent local time.  Click to embiggen.

Saturn was at opposition, when it is biggest and brightest as seen from Earth, on the 16th of April, but now is still a good time for telescopic views of this ringed world in the early evening, although you will have only a very short viewing tie before Saturn is too low to observe. Saturn sets around 9:30 local time


Mars, Saturn and the bright white star Spica from a long but attractive triangle in the evening sky. Over the week, the triangle becomes larger as Mars moves away from Saturn and Spica.

Comments:
What is the big, bright object I am seeing to the east between 4:00 AM and 5:AM. It is NOT Jupiter. I confirmed that with a 70mm refractor and a barlow lens. Jupiter is much higher up, almost overhead (eastern North America) and this object is much, much much larger (appears to be about 3 times the size of Jupiter with the naked eye). This object is much lower, above the horizon but not that high up. Its very, very very bright. It is silvery, does not look like a star or a planet. It is extremely large, and very very bright. What is this? I can't seem to find it anywhere. Everyone says I might be seeing a star but its bigger than any star I've ever seen. Its too big to be a star.

It's Venus (rotate the chart of Jupiter and Venus slightly so it's more linke the northern hemisphere view).