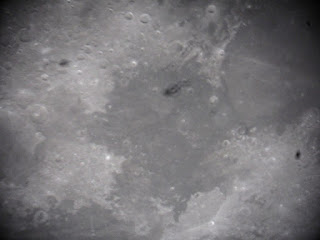 The Sea of Tranquillity as photographed through my 4" Newtonian (with added lens dirt).

In honour of Neil Armstrong, who died yesterday at the age of 82, I got my family and our visiting hemi-demi relatives to wink at the Moon. Then I got my small telescope out and showed them Mare Tranquillitatis, the Sea of Tranquillity, where Neil made his epic step.

As a geek child I was obsessed with the missions to the Moon, we had a copy of National Geographic with a fold out of the Apollo instument panel, and I used to sit in frontof it pressing the pictures buttons and switches and imagining it was me going to the Moon.

I clearly remember the  moment when Neil stepped on the Moon, seen on our tiny, grainy black and white TV. Unfortunately, I can't remember anything before of after that section. Perhaps my memories have been suborned to the continual replay of that iconic image.

Regardless, Neil was one of my heroes, the first person to set foot on another world. And I will honour his memory by showing people the wonders of the sky and the strangely shaped patch on the Moons' face where humans once walked (and, of course, winking).

If anybody wants to send me images of the Moon they took while winking at it, I will be pleased to post them. 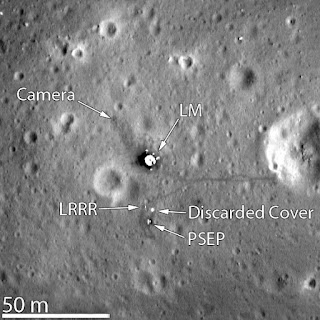 Tranquility Base imaged on March 2012 by the Lunar Reconnaissance Orbiter (Image credit:LRO/NASA)

Another way you can honour Neil's memory is to help Map the Moon.

A series of interviews with Neil Armstrong, strangely with an Australian accountant, can be found here.

A report on the ABC online news site is here.

The Bad Astronomers take is here.

And finally, this XKCD cartoon is very appropriate.

I posted a small tribute on my blog as well.

You were so lucky to see the first moon landing live on TV - spare a thought for some of us who were born way too late...I did not exist in 1969. :-(

You missed the first step Cynthia, but since them there has been the Titan lander, Spirit, Opportunity and Curiosity, Galileo and Cassini and let's not forget the ISS which lights up our nights some times. Great things are happening, and you'll get to see more some amazing things too.