A Plea for Sky Literacy 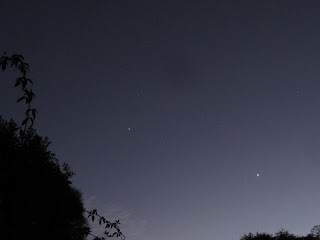 Venus, Jupiter and Aldebaran in the early morning sky around 6:20 as seen from Adelaide. click to embiggen

Over the past few years there has been a lot of effort to improve science literacy, the ability to understand the scientific process, given the importance of science to many parts of our lives..

I'd like to make a plea for sky literacy. The catalyst for this is a recent YouTube video purportedly of the fantasy planet Nibiru. The author laboriously points out various items as Nibiru, it's sun and a brown dwarf. Except he's looking at Venus, Jupiter and Aldebaran.

Now, Venus has been mistaken for other objects before, just this year it was mistaken for a flare and an oncoming aircraft. But it beggars belief that someone with an interest in finding unknown objects in space, in an era where there are lots of SmartPhoneapps that will help you find your way about the sky, could mistake our two brightest planets and the Brightest star in an iconic constellation (Taurus the Bull) for wayward super-Jupiters.

Okay, he could have been pulling our legs, but sufficient numbers of other people were also fooled. In weeks past a variety of ordinary astronomical phenomena have been identified as the illusory Nibiru (or some other planet X), only recently the Pleiades were identified as a mystery planet and moons.

How did it come to this, where people can no longer identify iconic parts of the sky? Light pollution plays a part, but in all but the most light polluted city centres the brightest stars and planets are readily visible.

Most of us now live largely divorced from our skies. We lurk inside our houses or flats, drive to and from work in enclosed vehicles, and if we do see the sky it's a thin slice divorced from context by looming brick and concrete structures, illuminated within an inch of their lives. 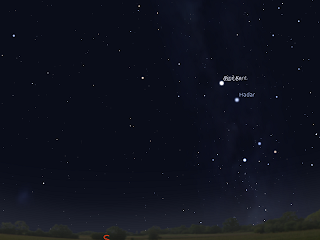 We have lost connection with our environment, and with that our heritage in the sky. Many people have told me that they could not find the Southern Cross, emblemic of Australia and a key celestial navigation aide, if their lives depended on it.

But knowing where the bright planets and stars will be in the sky is not just a matter of scientific knowledge, and their roles in our mythology and history, these things are beautiful in their own right. We have been slowly cut off from a source of joy in our world that is simple and completely free.

What do we need to improve sky literacy? I'm going to make an unusual suggestion, we should encourage people to walk more in the evenings.

If you are out walking the streets of your suburbs and towns you are more likely to look up and see the beauty of the sky, the crescent Moon near a bright planet, the flash of  an iridium flare, the quick burn of a meteor. You don't really need to know the names of these things, if you are out often enough to follow the slow change of the sky over the seasons you will get a feel for what the sky looks like (if you look up).

If people see these things they will be more likely to inquire about them, and learn at their own pace. As a bonus it will improve our health to be out walking.

Of course, there's a lot that needs to be done to encourage walking, there actually has to be decent footpaths for people to walk on, the streets need to be safe to walk in the evening, the lighting has to be bright enough for people to walk comfortably, but not so bright that it drowns out the sky. maybe even the occasional sky watching sign, like the constellation maps our local city council has erected.

But interms of improved health, better social connectedness as walkers meet each other and reconnection with our sky, it is well worth the effort.

And we will be less likely to be subjected to videos of someone mistaking  a bright planet for a passing super-Jupiter.

Comments:
This is a brilliant essay which I'm just trying to give wide distribution on social media and among educators: I've encountered numerous videos of the kind you describe, one even with a hi-res capture of Venus' true crescent shape which the maker takes for Nibiru's ultimate proof, and agree with your call for Sky Literacy 101%.

IMHO, in the 50s everyone was recovering from a war, all were working together, the "enemy" was 'elsewhere'. Now we're all incredibly better off than then, electronic technology (the result of science) is ubiquitous and people don't trust those in power. We are not working together and the "enemy" or "them" has become the 'establishment'. It's not a matter of pure scientific literacy it's wilful but unconscious dichotomies that human beings are eminently capable of.
That probably doesn't make any sense ...

that is an excellent read!

Carnival of Space #261 is Here!
Curiosity Parachutes to Mars, snapped by the MRO
The Sky This Week - Thursday August 9 to Thursday ...
There are Three Mars Rovers Hidden in this Picture...
Live blogging Curiosity's Landing
Mars, Saturn and Spica, 5 August 2012
What will Earth Look Like from Curiosity's Landing...
Watch Curiosity Land (or not) on Mars
Foggy Morning
The International Space Station, 31 July 2012