The First Quarter Moon is Thursday July 26. Mars is in the western evening sky closing in on Saturn. Saturn is visible near the star Spica in the north-western sky. On the 24th the waxing Moon is close to Mars on the 25th it forms a triangle with Spica and Saturn. In the morning skies Jupiter and Venus can be seen near each other forming a triangle with the red star Aldebaran. Mercury is visible low in the evening twilight, and is close to the Moon on the 20th. 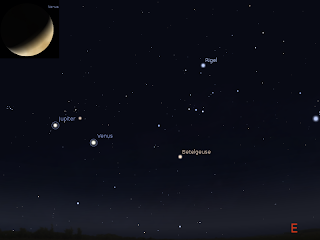 Morning sky on Friday July 20  looking east as seen from Adelaide at 6:00 am local time in South Australia.
Jupiter is near Venus in the Hyades, making a triangle with the red star Aldebaran.The the Pleiades cluster is close by. The left  inset shows the telescopic view of Venus. Similar views will be seen elsewhere at the equivalent local time (click to embiggen).

Jupiter climbs higher in the morning sky and is now easy to see. Jupiter moves closer to the Hyades over the week. Jupiter and Venus form a triangle with the red star Aldebaran.

Bright white Venus climbs higher above the horizon this week. Venus is an obvious crescent seen through even a small telescope. 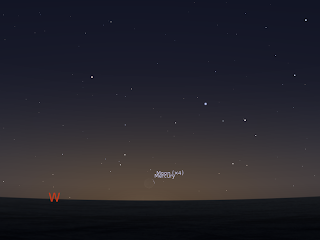 Evening sky looking west as seen from Adelaide at 6:15 pm local time on Friday July 20 showing Mercury above the horizon close to the one day old crescent Moon. Similar views will be seen elsewhere at the equivalent local time.  Click to embiggen.


Mercury is low in the twilight evening sky this week. It is best seen with a flat, uncluttered horizon. On Friday there is a difficult to observe meeting with the day old crescent Moon, you will need a very clear horizon, like the ocean to see this. By the end of the week Mercury is lost in the twilight.

Mars is in the constellation of Virgo. It's brightest object in the north-western sky, and its distinctive red colour makes it easy to spot. Mars is at its highest in the northern sky around 4:55 pm local time and sets shortly after 11:00 pm.

On Tuesday July 24 the waxing Moon is close to Mars. 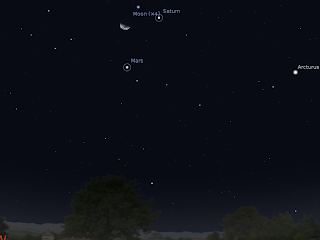 Evening sky looking north-west as seen from Adelaide at 8:00 pm local time on Wednesday July 25 showing Saturn and Spica forming a triangle  with the Moon. Mars is nearby. Similar views will be seen elsewhere at the equivalent local time.  Click to embiggen.

Saturn is above the north-western horizon, not far from the bright star Spica. Saturn is high enough in the northern sky for telescopic observation in the evening, being highest at 5:50 pm local time. Saturn was at opposition, when it is biggest and brightest as seen from Earth, on the 16th of April, but now is still a great time for telescopic views of this ringed world in the early evening.

On Wednesday July 25 the waxing Moon forms a triangle with Spica and Saturn.