Nibiru Fails to Appear on July 21 (Are we Surprised?) 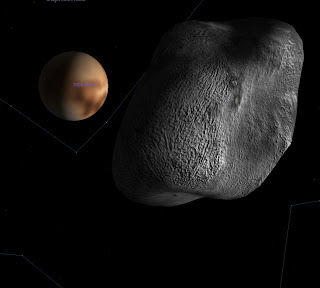 Pluto as seen from Nix, it's not Nibiru, but we can pick up rocks the size of skyscrapers out into the cold dark depths, yet somehow a planet the multiple times the size of Earth has apparently eluded all the people who actually look at the sky.

Yet another set of internet rumours have been swirling around the mythical planet Nibiru.

This time the alleged planet (and it's 34 Moons!) was set to collide with us on  July 21.The original was sourced from that fount of all knowledge, the World Weekly News (which, although the link says July 21, the page now says November 21). Despite the fact that not one word of the original article was true (it was the World Weekly News, what did you expect?) the rumour spread rapidly to the very corners of the internet.

The internet rumours had many people panicking. This is particularly reprehensible. Often I and other astronomers who write showing that Nibiru cannot exist get emails accusing us of arrogance. Arrogance?  Arrogance is when you put rumour before fact checking, when you let your ignorance of the most basic science not dissuade you from causing angst and fear in vulnerable people.

(other good sites for information are here, here and this video here)

Comments:
I am not suprised that Nibiru did not appear, however there are a star visible in daylight from yesterday 21 July 2012.

This star can be seen as a very bright and unusualy big star in the early hours of the morning from the east coast of South Africa in a northern direction.

I monitored this star for the last three weeks and it is moving in an easterly direction on a daily basis.

The most striking element is that this star can be seen well after sunrise. At 08H00 this moring South African time i could still see this star.

Does any one care to explain this.

Please don't call Nibiru a mythical planet. The Sitchin drivel relies on rewriting Sumerian mythology and dignifying the thing as 'mythical' sounds like a partial acceptance of Sitchin's claims. 'invented' or 'fabricated' would be better.

Venus can be seen from the early hours of the morning, as can Jupiter.. yet dimmer, mars and Saturn are visible at night.

Venus is the very bright star visible in the morning sky, even when all the other stars have disappeared because od daylight. It's not unusual at all.

Anonymous 2: Good point, I hadn't thought about the Stichin angle at all. I'll avoid this usage in furure.

Anonymous 1: What you are seeing is Venus (see also here).

Venus is readily visible in daylight, and one of my hobbies is spotting it after sunrise (yes, I'm a geek, I know).

yeah, and the author is a massive hypocrite by taking that angle. how dare you take some holy stance about science dissuading fears because some people speculate about Nibiru when you guys are the same ones who bring us all the Discover channel tv shows about gamma ray bursts destroying all electronics, cumbre viaja falling into the ocean and creating mega tsunamis, asteroid collision, super-volcanoes and the list goes on. so yeah, you can say nibiru is silly but get off your holy high stance because YOU guys bring us the cataclysm concepts ALL the time. shut it, nobody likes a hypocrite.