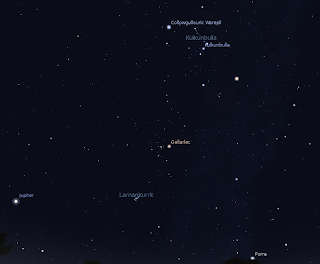 Over at Astronomy Blog Stuart has the story of  Aldebaran the Hunter, an African Bushman's tale of the stars we we associate with Greek and Roman mythology. I promised to give a similar tale from Indigenous Australians.

Unfortunately most of the Indigenous lore of South-Eastern Australia  is lost. Still we have some stories. This one comes from the Boorong peoples of north-west Victoria.

The stars we know as the belt and sword of Orion (or the Saucepan, here in Australia) are Kulkunbulla, a group of young men dancing a corroboree. Larnankurrk, the group of stars we know as the Pleiades, is a group of young women watching th young men dance. Gellarlec (Aldebaran) is an old man singing and beating time to the dancing. Gellarlecis also known as the Major Mitchell Cockatoo.