The New Moon is Wednesday June 20.  Mars is in the western evening sky.  Saturn is visible near the star Spica in the northern sky. In the morning skies Jupiter, Venus and the crescent Moon are close on June 17 and 18. Mercury is close to the thin crescent Moon on the 21st. Earth is at Solstice on the 21st. 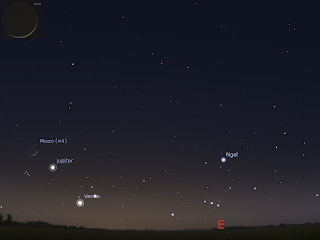 Morning sky on Sunday June 17  looking east as seen from Adelaide at 6:30 am local time in South Australia.
Jupiter is near the thin crescent Moon, not far from the Pleiades cluster. Venus is close to the horizon. The inset shows the telescopic view of Venus. Similar views will be seen elsewhere at the equivalent local time (click to embiggen).

Jupiter climbs higher in the morning sky this week. It will become progressively easier to see, but is still best if you have a fairly flat, uncluttered horizon. On the 17th, the thin crescent Moon, Jupiter and the Peliades cluster make a nice sight. If you have a level horizon, with the Hyades and Venus below make it makes a fantastic picture.

Bright white Venus is just above the horizon this week. Venus is a thin crescent seen through even a small telescope. If you have a clear level horizon you can see the thin crescent Moon close to it on the 18th. 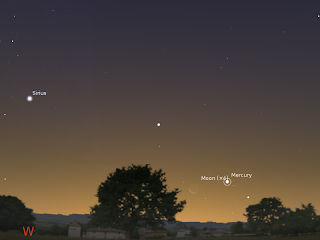 The New Moon is Wednesday June 20. Earth is at Solstice on the 21st. in the southern hemisphere, this is when the day is shortest and the night is longest.

Mars is in the constellation of Leo but will enter the  constellation of Virgo next week. It is the brightest object in the north-western sky, and its distinctive red colour makes it easy to spot. Mars is rising before sunset and is at its highest in the northern sky around 6:00 pm local time.

Mars leaves behind the bright star sigma Leonis and heads towards beta Virginis.

Saturn is above the northern horizon, not far from the bright star Spica. Saturn is high enough in the northern sky for telescopic observation in the evening, being highest at 8:45 pm local time.Saturn was at opposition, when it is biggest and brightest as seen from Earth, on the 16th of April, but now is still a great time for telescopic views of this ringed world.

Still More Venus Transit Awesomeness
Farewell Beautiful Comet C/2009 P1 Garradd
Carnival of Space #253 is Here
Images from My Transit of Venus, June 6 2012
Other Peoples Transit of Venus Images and Videos
A Martian Chronicler Has Died
The Sky This Week - Thursday June 7 to Thursday Ju...
The Transit of Venus as seen from the Solar Dynami...
Venus at Mid transit by Mobile
Better shot of transit